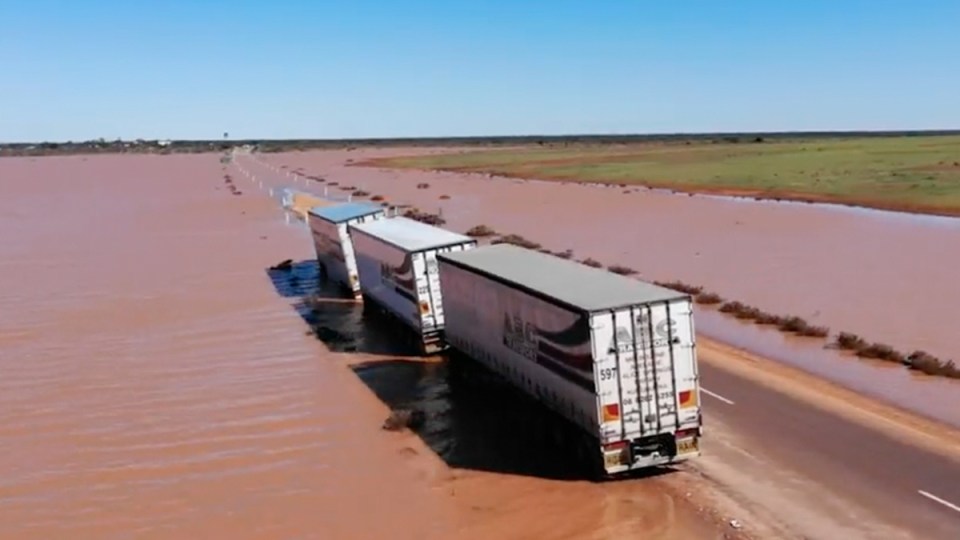 The Stuart Highway, the crucial link between Adelaide and Darwin, has reopened to some trucks. Photo: Twitter

Freight has started to flow through the flooded section of Stuart Highway, in South Australia’s north, ahead of plans to allow greater access this week.

Although water remains on the road, the crucial travel route – the main link between Adelaide and Darwin – has been declared safe for truck use during daylight hours.

As water continues to recede, it’s expected the highway will re-open to high-clearance 4WD vehicles from Tuesday and may open to all traffic later in the week under restricted management conditions.

Premier Steven Marshall said strict conditions would be applied along a 600-metre section of highway, with a 20km/h speed limit and only one truck permitted to use the section at a time.

“We’ve been working hard with emergency services to re-open the highway as soon as possible, but we need to do it in a safe way that will not damage the road further,” he said.

“There is still a huge amount of clean up work to be done but we are relieved to re-open the highway and see the community gradually transit through.”

Mr Marshall said the state government had asked the Commonwealth for disaster support and was hopeful of a response early this week.

The damage to the highway came after a several days of heavy rain across the outback that rendered most unsealed roads unpassable and isolated local communities.

The floods also cut the main rail lines between SA and both the Northern Territory and Western Australia.

The Australian Rail Track Corporation said crews had worked around the clock to repair damage at 18 locations and were focused on the remaining six.

“Revised assessments by meteorologists following the rainfall now describe the flooding as a one-in-200-300-year event,” a spokesperson said.

“As a result of the volume of water that was recorded, we are required to re-build access roads from the highway to the rail network to enable the movement of heavy machinery to site.

“It is expected that more than 50,000 tonnes of ballast and rock, which is being stockpiled at a number of locations on the network, will be utilised in the repair activity.”

The ARTC said the repairs should be completed by mid-February.

The Bureau of Meteorology said the rain over central Australia in January was brought by ex-tropical cyclone Tiffany as it moved south.

As a result, falls across the state last month were 175 per cent above average. SA recorded its fourth- wettest January on record and its wettest since 1984.