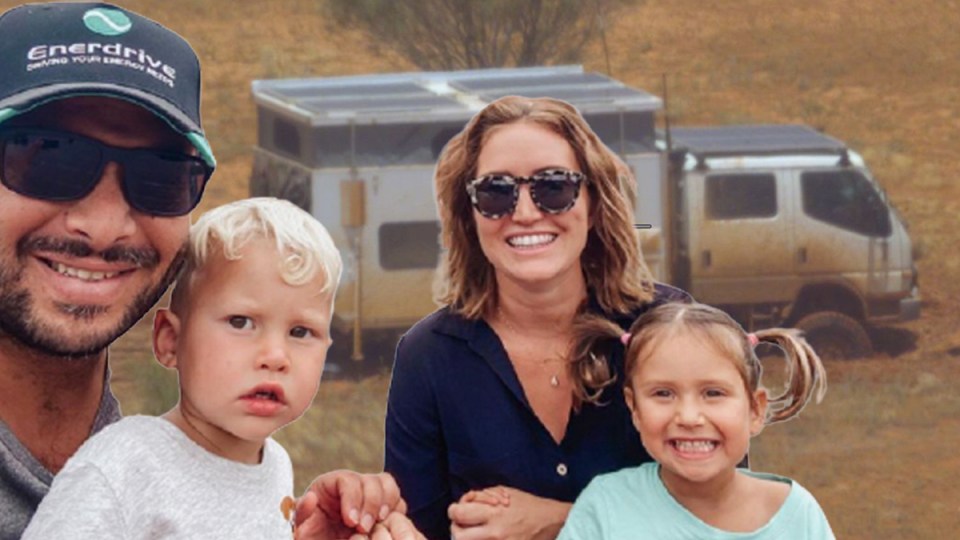 The Zavros family have been rescued after five days stuck in the Simpson Desert. Photo: TND

A young Perth family of four has been rescued from the Simpson Desert in South Australia’s outback after being stranded for five days.

The Zavros family had been stuck in the desert since last Friday after their campervan became bogged due to heavy rain.

A South Australian Police helicopter was dispatched on Tuesday morning to retrieve the family, who were lifted to safety about 4pm local time.

“It’s been emotional, a bit of a rollercoaster but we got through it.”

Mr Zavros posted on Instagram a photo of him and his family – wife Lindsey and kids Zoe and Zane – after being rescued by South Australian Police.

Roads near the scene, about 150 kilometres north of Oodnadatta, had been flooded and inaccessible to authorities following torrential rain.

Authorities were expected to have to wait up to two weeks for the surrounding area to dry, before the SA Police helicopter mobilised.

Mr and Ms Zavros and their children were safe and well and had been in regular contact with authorities, SAPOL said in a statement.

“After the first couple of days we sort of realised that we wanted to get out of there pretty quick,” Mr Zavros said.

“We were concerned that we might have got stuck there for a few weeks, worried about the heat.

“Thankful that it’s over now.”

The family stayed in Coober Pedy on Tuesday night before making further travel arrangements. Mr Zavros said they were grateful to be safe.

“The police and the search and rescue teams, we’re forever grateful to them,” he said.

“Hopefully we’ll sift through all the messages and see if we can respond to them all. There’s a lot of them. I will crack a cold beer and a champagne.

Ms Zavros’ initial plans were also simple: “I want to wash my hair,” she said.

The family’s desert plight was revealed when they activated an emergency beacon on Friday, after their campervan got bogged. Authorities used a rescue plane from Essendon to drop off a satellite phone and essential supplies at the weekend.

Mr Zavros said he and his family felt safe as soon as they received the satellite phone.

He said it was a big relief to be able to speak to family members.

“That made things a lot easier, once we were able to talk to them, everyone was relieved.

“They were obviously worried hearing that the beacon had gone off.”

Mr Zavros said a morning rituals of morning walks, icy poles at lunchtime, as well as watching Bluey DVDs kept his children’s spirits up during the five days.

The family had been on a 12-month tour in of Australia since November 2020.