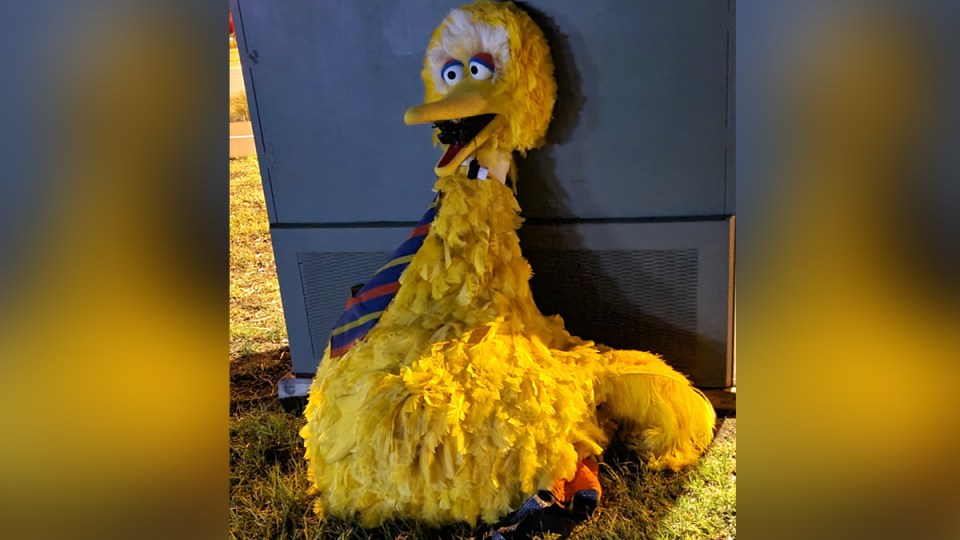 The $160,000 costume was found dumped near the circus shortly after it was stolen. Photo: SA Police

A third person has been arrested over the theft of a Big Bird costume from a circus in Adelaide earlier in 2021.

Two men, Tasman Binder, 22, and Cody Milne, 26, have already appeared in court accused of stealing the $160,000 costume from the Sesame Street Circus Spectacular at Bonython Park in April.

This week, South Australian police released images of a woman they suspected of being a previously unknown third suspect involved in the theft.

On Thursday, a 20-year-old woman from Woodville Park was arrested and charged with theft.

She was bailed to appear in the Adelaide Magistrates Court on September 15.

The Big Bird costume was returned a few days it was stolen, along with an apology note signed by “The Big Bird Bandits”.

Found in the beak of the costume, it apologised for being “such a big birden”.

“We had no idea what we were doing, or what our actions would cause,” it said.

“We were just having a rough time and were trying to cheer ourselves up.

“We had a great time with Mr Bird, he’s a great guy and no harm came to our friend.”

The 213-centimetre-tall costume is made from ostrich feathers and was flown from New York for the show.

Mr Binder and Mr Milne, who are from Norwood and Murray Bridge, appeared in court two weeks ago, charged with theft and unlawfully being on premises.

A curfew and a ban on them contacting each other was removed from their bail conditions. They remain banned from attending the circus.

Mr Milne and Mr Binder will next appear in court in November.

‘An outlet to express ourselves’: How skaters are shredding those ugly stereotypes
Diesel fraudster jailed for fake claims
Today's Stories