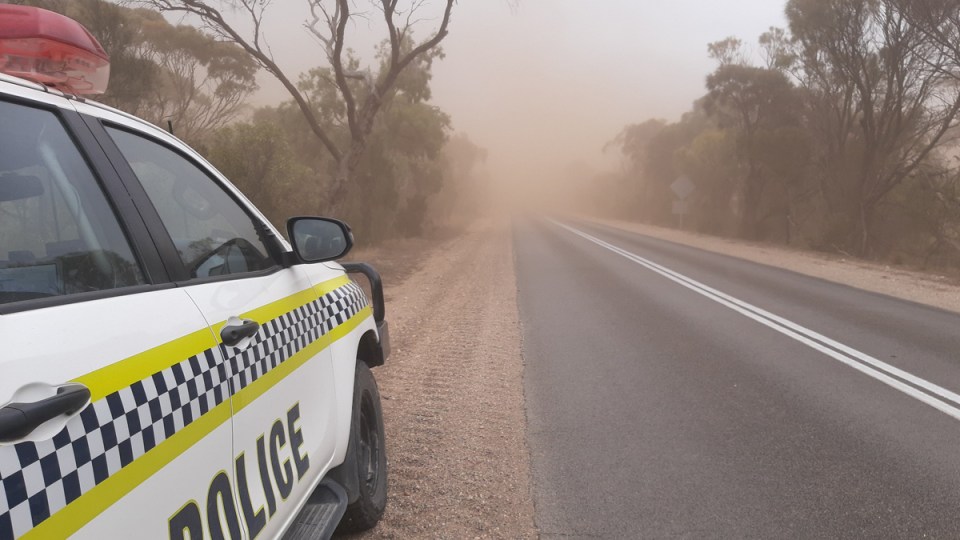 The dust made vision on the roads poor across South Australia on Tuesday afternoon. Photo: Twitter/SA Police

Dust whipped up by strong winds across South Australia has prompted health warnings after a day of severe fire danger across nine districts.

Adelaide was blanketed by dust on Tuesday afternoon with reports of severely reduced visibility in many regional areas.

SA Health urged anyone with asthma and other chest conditions to stay inside.

“We know that exposure to high levels of dust can aggravate conditions such as asthma, emphysema, bronchitis and other respiratory diseases,” Dr David Simon said.

“We also know that high levels of dust can be associated with an increased risk of cardiac events such as heart attacks.

“We advise people with health concerns to avoid exposure to dust, stay indoors, and keep their doors and windows closed.”

The warning came after the threats posed by a string of bushfires across SA reduced.

The Country Fire Service said fires on Kangaroo Island, in the Adelaide Hills and north of the city were no longer a risk to lives and homes.

They had been fanned by rising winds ahead of a cold front moving across the state.

The Bureau of Meteorology said the remnants of tropical cyclone Seroja were being captured by the front.

Temperatures were forecast to climb into the mid-30s in some regional centres while Adelaide, which was tipped to have a top of 26 degrees before the change, reached 23.5 degrees.

By mid-morning the strongest winds were reported on the Eyre Peninsula, with 80km/h at Wudinna and 78km/h at Port Lincoln.

There were no reports of major damage, though the State Emergency Service said it had responded to 34 calls for assistance, mainly related to fallen trees.

SA should get some showers in the next few days, but forecasts were for no more than a few millimetres, well short of any significant break in the season.