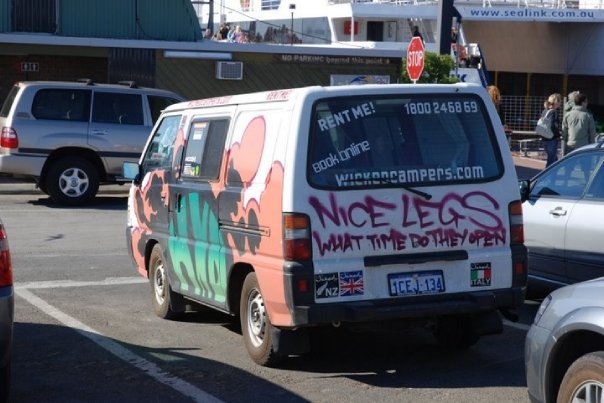 Offensive slogans, such as those featured on some Wicked campervans, are set to be banned. Photo: Supplied/Wicked Campers

The law would give the Registrar of Motor Vehicles the power to cancel a vehicle’s registration if the owner refuses to remove offensive material following a request from the advertising industry self-regulation body Ad Standards.

The move follows ongoing complaints about “offensive” and “sexist” slogans on vehicles, especially on the sides of Wicked campervans.

A government bill passed the Lower House yesterday afternoon with the support of the Labor Opposition, which first tabled its own legislation for such a ban in November 2018.

The legislation is expected to pass the Upper House later this month.

“There is no place for this type of garbage in our community,” Transport Minister Corey Wingard said in November, when the legislation was tabled.

“That’s why we’ve taken action to ensure demeaning and disgusting slogans will no longer appear on vehicles driving around South Australia.”

SA Labor’s spokesperson for the Status of Women, Katrine Hildyard, said the ban should have been in place years ago.

“As community leaders, as parliamentarians, it is absolutely incumbent on us to speak up and do whatever is in our sphere of influence to end disrespect and violence against women.”

Queensland was the first state to outlaw sexist, obscene and other offensive slogans on vehicles in 2017, with Tasmania following suit.

Offensive slogans on vehicles, including Wicked Campers, set to be banned in South Australia