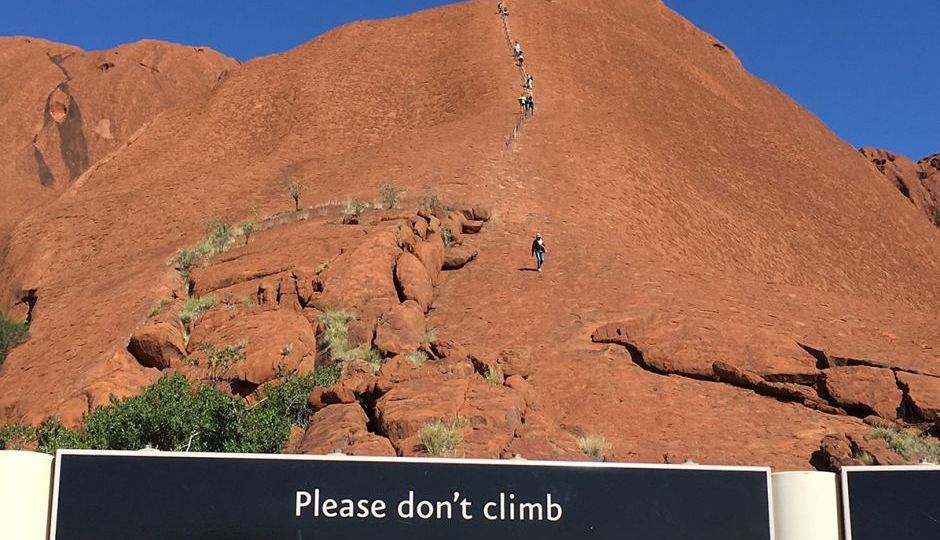 The girl was climbing with her family on Sunday when she slipped and fell up to 30 metres. Photo: ABC News

As tourists flock to Uluru ahead of the October 26 climb closure, a young South Australian girl has fallen at least 20 metres while descending from the summit.

The girl was visiting Uluru on Sunday with her parents and younger brother when she lost her footing and fell on the lower section of the climb, near where the chain is located.

Troy Dicks is a flight nurse with the Royal Flying Doctor Service and was part of the 12-year-old’s emergency retrieval to the Alice Springs Hospital.

Mr Dicks was initially concerned at the potential injuries given the nature of the incident.

“I was greatly concerned and was thinking there was going to be critical injuries, but fortunately she’s done really well,” he said.

“Her family assisted her and there was lots of bystanders that were rendering assistance.

“They actually carried her down and Yulara clinic picked her up from the base of the rock.”

Lucky to be alive

Mr Dicks said the girl was incredibly lucky not to have sustained more serious injuries.

“She was stabilised at the clinic by the remote area nurses at the Yulara clinic. She apparently had a nasty finger injury that was dressed and cleaned,” he said.

“It was a compound fracture. So there was bone showing.

“She was covered in grazes because she had rolled down Uluru quite a lot and [that] took a lot of skin off.

“She also had an ankle injury. I’m not sure whether it was broken or not but it was certainly swollen and deformed.”

Mr Dicks said the patient and her family were relieved given the circumstances.

“She was surprisingly well and in good spirits,” he said.

A spokesperson from the Alice Springs Hospital confirmed that the patient is in a stable condition.

Girl, 12, ‘lucky to be alive’ after falling while climbing Uluru