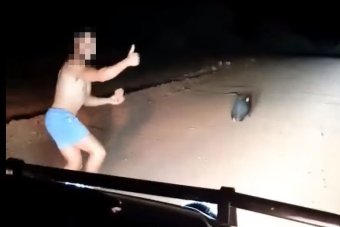 The man gives a thumbs-up to a person in the car while chasing the wombat. Photo: supplied

South Australia Police are investigating a video that appears to show an off-duty officer badly injuring or killing a wombat by throwing rocks at it.

The video posted on the Wombat Awareness Organisation Facebook page shows a shirtless man chasing a wombat along a dirt road and throwing rocks at it.

At the end of the video, which the ABC has chosen not to show, the wombat falls over and stops moving after the man hits it in the head several times with a rock.

A man in a car following the man declares that the man throwing rocks has killed the wombat.

“First bloke to ever see killing a wombat on foot with a rock, mate.”

Police Commissioner Grant Stevens confirmed the man in the video was a police officer.

“We’ll be dealing with that as a disciplinary matter within the South Australian police and if there’s any offences committed, they’ll also be investigated as well,” he said.

In a statement, a police spokesman said: “South Australia Police are aware of a social media video depicting an incident involving a man inflicting injuries upon a wombat.

“At this time SAPOL can confirm they are taking the situation very seriously and are closely examining the video.

“An inquiry is being undertaken into this matter to first formally identify the man.”

The Wombat Awareness Organisation runs a wombat sanctuary in the Adelaide Hills.

The RSPCA directed enquiries to SA Police after earlier saying it would be investigating the video.

The man in the video has been approached for comment.