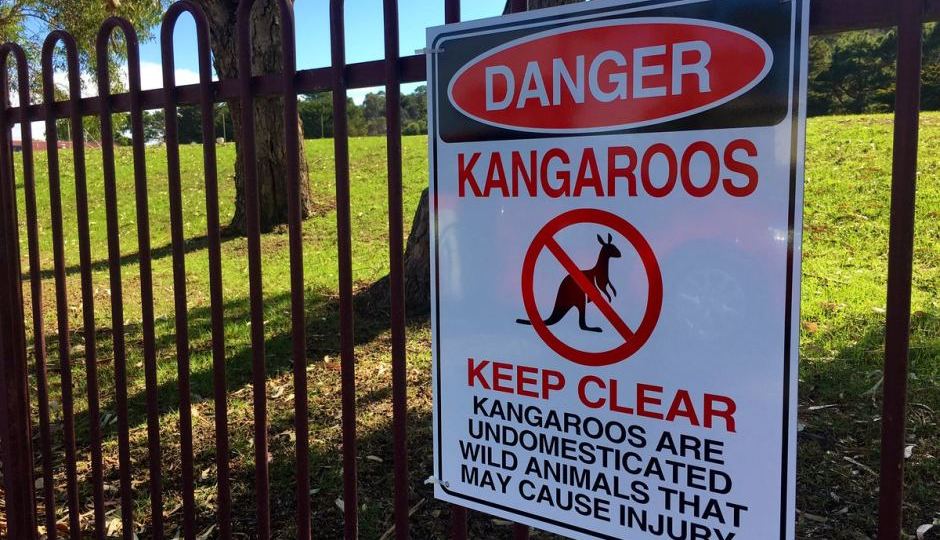 Six signs warning about kangaroos have been put up at the Yankalilla Area School. Photo: ABC News

A South Australian school is warning students, parents and staff about the risk posed by kangaroos on school grounds after two were recently spotted boxing on the oval.

For the past few weeks, Yankalilla Area School, south of Adelaide, has seen a rise in kangaroo numbers at the school.

The animals have become bolder, with more venturing on to the school oval and raising concerns about the potential risk to students.

“The minute the bell goes and the students are in the classroom, down come the roos. They’re getting more friendly as time goes on,” principal Christine Bell told ABC Radio Adelaide.

“They’re there in their droves. We’ve had busloads of people pulling up taking photos, which is all very cute but it’s not good.”

Ms Bell said two kangaroos were recently spotted “boxing it out in the middle of the oval” of the school.

“They would have stood up well over six foot … they can be quite dangerous,” she said.

“Local people generally learn to live with kangaroos but especially with the weather like it is at the moment, with the lack of rain, it certainly has become a problem at our school.”

Mayor Glen Rowlands said the District Council of Yankalilla had been in talks with state Environment Minister David Speirs, and the animals would be shot.

“There are culling programs,” he said.

“We’re going through a drought, so if we went up to the Flinders there [would] be a good natural cull happening at the moment because it’s dry and they are dying of starvation.

“It’s sad and inhumane, but that’s the way nature works.

“Down here … they have food, water and shelter.”

Mr Rowlands said kangaroo populations had been growing across the Fleurieu Peninsula over the past decade, and shooting could not occur within 500 metres of homes.

The Yankalilla Area School is on a large block and has previously hosted about 60 to 80 kangaroos in its farm area.

However, the principal estimated another 40 to 50 began venturing further to the school during the recent holidays.

“A few people were being silly and not understanding roos and were chasing them,” Ms Bell said.

“We had quite a few chased onto South Road, some children chasing them on the oval. It only takes one to turn around and they could be in strife.

“We’re currently looking at fencing our farm off with some sort of roo-proof fence, if there is such a thing, because … we need to provide a safe place for [students] to learn.”

Staff have put up six warning signs around the school alerting children and parents to the potential danger.