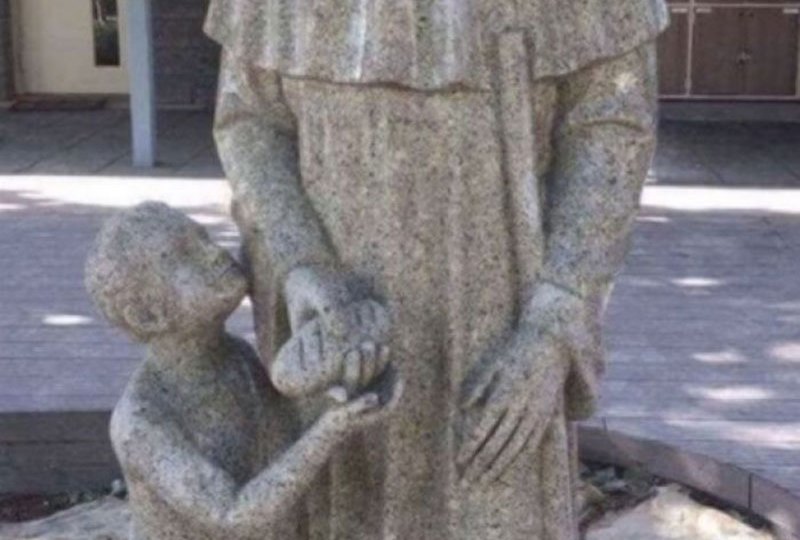 An Adelaide Catholic school has covered up a statue of a religious icon after it created a stir on social media because of its apparently unintended suggestiveness.

The statue was recently installed at Blackfriars Priory School in Prospect and depicts a 16th century saint handing a bread loaf to a child’s outstretched hand.

But, as numerous online commentators have pointed out, the effect is somewhat different.

In the past 12 years, at least two former Blackfriars teachers – Stephen John Stockdale-Hall and Ronald William Hopkins – have been jailed for sexually abusing students at the school.

On Wednesday, the school said the design of its new statue looked fine on paper but acknowledged it could be interpreted in a more sinister way.

“The two-dimensional concept plans for the statue were viewed and approved by the [school’s] executive team in May but upon arrival the three-dimensional statue was deemed by the executive to be potentially suggestive,” principal Simon Cobiac said in a statement.

“As a consequence, the statue was immediately covered and a local sculptor has been commissioned to redesign it.”

Mr Cobiac said the embarrassing artwork was created in Vietnam by a sculptor who had done other work for the school.

“The sculpture is a famous depiction of the tireless work of St Martin de Porres, a Dominican brother, for the poor and downtrodden of the 16th century,” he said.

“The school apologises for any concerns and publicity generated by this matter and is taking action to substantially alter the statue.”

Social media users were stunned no one had spotted the inappropriate overtones.

“Did nobody look at the design first?” one person tweeted.

Satirist Ben Pobjie said he was “just glad Blackfriars school noticed how suggestive the statue was before they turned the water feature on”.

The school recently made headlines because of a hoax letter by one of its students distributed to thousands of others claiming the Year 12 biology exam would have to be re-sat.

Author Salman Rushdie stabbed in the neck by masked assailant on stage
Ex-Liberal staffer: Survivors weren’t asked about their ordeals in NSW parliament
Idaho follows US Supreme Court lead and bans virtually all abortions
‘We have lost a bright light’: Actress Anne Heche dies a week after fiery car crash
Shot in the arm for electric vehicles as Hertz launches local rentals
Kyrgios blows away de Minaur in all-Aussie clash in Montreal
Cassie Sainsbury sentenced, could be out in six months as judge says she was a ‘victim’
Today's Stories

Catholic school apologises for ‘suggestive’ statue of saint and child