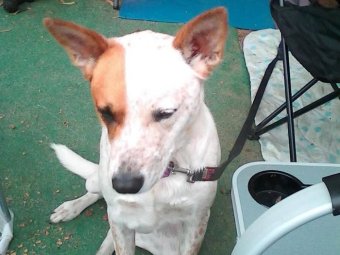 Abby has been promised a bone for her amazing feat. Photo: Supplied/Michael Pethick.

A red heeler dog, Abby, has raised the alarm for rescuers after her owner fell and fractured her leg on a cliff on South Australia’s Yorke Peninsula.

Sue Pethick was walking the family pet at Gleesons Landing on southern Yorke Peninsula on Monday afternoon when she slipped down the rocky cliff face.

The woman’s husband, Michael, said he became worried when his wife, 55, and the dog had taken longer than usual for their walk.

He said Abby then turned up at their camping site without his wife.

“When I saw Abby on the sand dune and Sue wasn’t with her, I knew something wasn’t right,” he said.

“I called her to me and she came running over. I said to her ‘take me to where mum is’ and she started to trot off on this little track.”

“She just stopped there and kept on looking down and looking at me,” he said.

“By the time I got within 20 or 30 metres out, I started calling out and I could hear Sue’s voice and she said ‘I can’t move’.”

Mr Pethick said it was quickly evident his wife was seriously hurt.

“Down this rocky base was Sue on her back and her ankle was pointing in a different direction,” he said.

He ran from the scene until his phone had reception, then called triple-0.

Two women involved in surf lessons on the beach went to the injured woman’s aid, staying with her until emergency services arrived.

It took rescuers about two hours to stabilise the woman’s condition and get her back to the top of the cliff.

Mr Pethick said the pain made his wife pass out a couple of times.

The woman was airlifted to the Royal Adelaide Hospital for surgery on her injured ankle.

Mr Pethick said Abby was keenly aware something was wrong when he eventually took the dog back to the camp site, then packed up to head home.

“I could sense that she just wasn’t comfortable with me driving off without Sue,” he said.

“She’s certainly a little hero now — I’ve just pulled a big bone out of the freezer, so when that defrosts she’ll get that,” he said after returning home.

Family dog a hero after owner falls over cliff