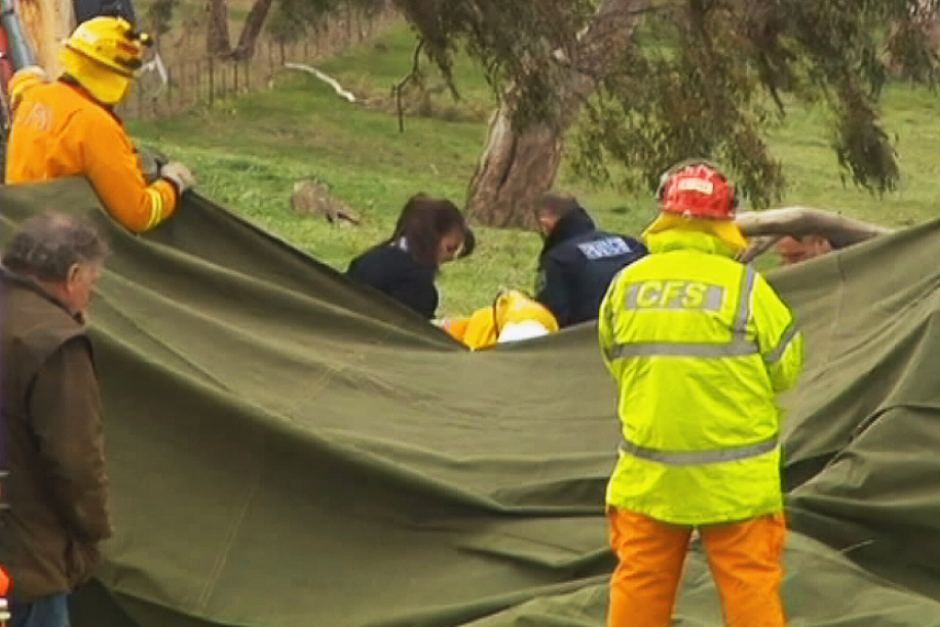 A man clearing up storm damage near his home in the Adelaide Hills has been killed after being crushed by a falling tree.

Police said Ray Fox, 71, was removing a fallen tree from the road at Tungkillo when a second tree fell on him at about 11:00am on Monday.

Emergency crews went to the scene in Gladigau Road but paramedics were unable to resuscitate the man, who was a local resident.

Police have warned the public to take care near large trees during storm activity, which is expected to continue with a severe weather warning being extended across almost the entire state.

Earlier, a woman received leg injuries when a tree fell onto her at Macclesfield, and a man was hurt when a water tank fell on him at Tungkillo.

A caravan also tipped onto its side at Gemmells and a man inside had to be rescued.

Two cars were crushed when a gum tree fell at Meadows.

“I want to encourage people to be particularly vigilant on the roads,” he said.

“Since the start of the school holidays there’ve been a number of fatal accidents around the state and indeed with very cold conditions being forecast over the next couple of days, we do have concerns for icy and slippery conditions in the hills.”

The Bureau of Meteorology (BoM) has extended a severe weather warning for damaging winds and heavy rainfall across most of the state’s districts, with the exception of the northern pastoral districts.

It said damaging winds that eased in the afternoon were expected to strengthen Monday night and into Tuesday morning as a vigorous cold front swept across the state.

Wind gusts of more than 90km/h are forecast overnight and are expected to be associated with showers and thunderstorms near the coast or over elevated areas.

The State Emergency Service (SES) is distributing sandbags from Edinburgh and Port Adelaide premises in northern Adelaide, and Noarlunga in the southern suburbs to people whose properties might be at risk.

A flood watch is also in place for the Mount Lofty Ranges and the mid-north.

More than 10,000 properties w0ere still without electricity at 9pm on Monday after high winds brought down power lines.

SA Power Networks has warned of lengthy delays as it deals with outages.

John Nairn from the BoM said wind conditions were not expected to ease until dawn on Tuesday and would be replaced by heavy rain and even snow in some parts of the state.

This included the Adelaide Hills, Mid-North and Flinders Ranges districts.

“Those sorts of conditions can reoccur with the winds restrengthening in the hours before dawn tomorrow so we do have some concerns that we may see those sorts of winds again,” Mr Nairn said.