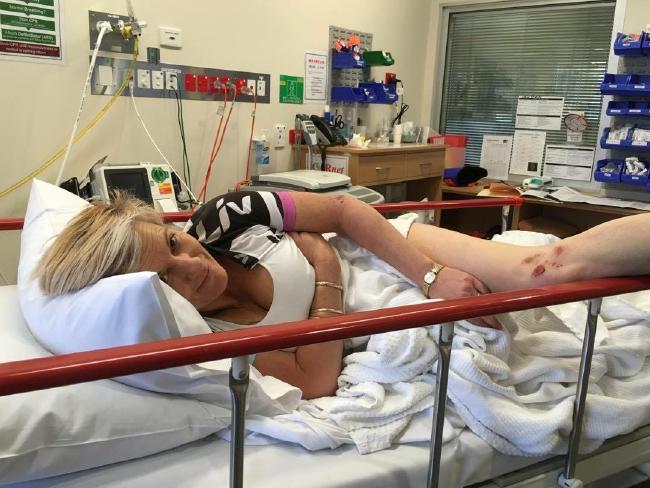 Sharon Heinrich, 45, from the Clare Valley was cycling on the Riesling Trail with her friend Helen Salter when the “cute” buck kangaroo jumped down from an embankment onto the two ladies.

Ms Heinrich said the kangaroo was about half-a-metre above them on a ledge of the trail.

“He was cute. He was a lovely kangaroo until he did do what he did,” Ms Heinrich told 891 ABC Adelaide.

“He jumped down and took our cycles out and used myself as a little airbag and then [has] taken Helen out and hopped away into the wilderness.

“He’s taken out the left-hand side of me and then as I’ve gone to tip that’s when he’s pushed off and landed on Helen.”

Ms Heinrich, who is 163cm tall, said the kangaroo was “well and truly” taller than her.

She said she still had a dead leg, three cracked ribs and grazes, as well as the ruptured breast implants.

Ms Salter had a concussion and whiplash.

Tourists urged not to let attack ‘scare them off’

Ms Heinrich will travel from Clare to Adelaide for surgery on Thursday.

“They [the implants] are silicon and saline, and the saline will just go through your body, but the silicon now congeals so it stays within the area but it’s very painful, it’s up there with cracked ribs,” she said.

“I’m scared and I’m not ready for the pain on top of the cracked ribs, because they’re actually right behind that area, but at the end of the day you’ve just got to keep going.”

Ms Heinrich urged anyone wanting to do the Riesling Trail not to be put off by the attack.

“Please don’t let anybody be scared of that Riesling Trail, because it was a beautiful, beautiful ride before ‘Skip’ played,” she said.