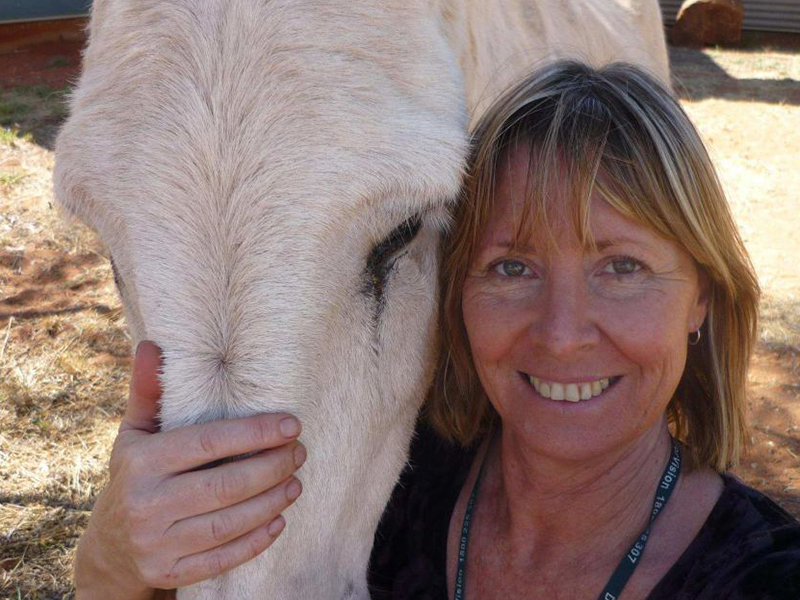 The children of slain outback nurse Gayle Woodford have remembered her as a “devoted and beautiful” person.

Mrs Woodford, 56, was last seen alive by her husband on Wednesday night at their home in the remote APY Lands community, 1200 kilometres north-west of Adelaide.

Her body was found on Saturday.

Speaking publicly for the first time since her disappearance, Gary and Alison said their mother was a loving woman who dedicated her life to helping others.

“Our family would like to take this opportunity to express our devastation on the loss of our beautiful loving wife and mother,” Mr Woodford said.

“We are having difficulty coming to terms with this unprovoked and premature end to mum’s life.

“Anyone who knows mum would appreciate the kind, generous and loving, devoted and beautiful person she was.

“She always devoted her life to not only her family and friends but has given so much to the community. She wanted to make a difference to people’s lives through her nursing and caring for others.”

“Our hearts are breaking every second,” she said.

Gayle Woodford’s body was found in a shallow grave about 1.5 kilometres east of her home town of Fregon after a three-day search.

She had worked for the Nganampa Health Council for more than five years and often worked alone, receiving late-night call-outs.

A Mimili man, who had been charged with the theft of the ambulance Mrs Woodford used for work, was on Sunday charged with her murder.

‘A crime that could have occurred anywhere’

Police said they believed Mrs Woodford went missing from outside her home in the middle of the night.

“This is a truly sad crime, it shouldn’t be seen as a reflection on Fregon,” Detective Superintendent Des Bray said.

“This is a crime that could have occurred anywhere.”

He said forensic investigators still had a lot of work to do.

“Gayle’s body will go to Adelaide today … and our forensic response people will be staying here tonight,” he said.

The charged man was one of three people found inside the vehicle when police intercepted it 400 kilometres away in Coober Pedy the morning after Mrs Woodford disappeared.

The Federal Health Department released a statement to offer its sympathy to Mrs Woodford’s family and loved ones.

“Since her disappearance the department has been in constant contact with Nganampa Health Council and we have offered any support that is needed as the staff and community deals with this tragedy,” a spokesman said in a statement.

“As the circumstances around Mrs Woodford’s death are still unknown and the issue is a matter of an ongoing police investigation, we will not be commenting further at this stage.”