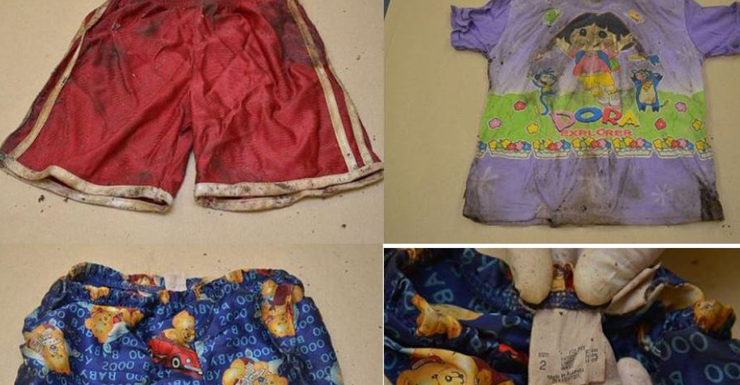 New images of clothing found in a suitcase that was dumped with the remains of a young child on the side of a South Australian highway have been released in an attempt to help identify the suspected murder victim.

The skeletal remains of the child, aged between two and five, were found in scrubland by a motorist on the side of the Karoonda Highway about two kilometres west of Wynarka, in the Murray Mallee region, on Wednesday.

SA Police this morning released more images of the contents of a suitcase and said they had received about 100 calls, including some from interstate, to Crime Stoppers.

Many of the calls have been to check on the welfare of children who police say are not connected to the investigation.

The latest images to be released include girl’s pyjamas, pink track pants, coat and a Dora the Explorer T-shirt.

Detective Superintendent Des Bray, the officer-in-charge of Major Crime Investigation Branch, urged anyone who recognised the clothes to contact police.

“From 5pm last night police have received nearly 100 calls from the public to Crime Stoppers, which is encouraging,” he said.

“Forensic scientists are also working around the clock to help provide vital information to assist in the investigation.

“We believe the child aged between two to five years was murdered at another location but the motive and the exact timeframe is unknown.”

Crucial details such as the child’s gender, DNA profile and cause of death have not been determined, but police have said the child suffered a “violent, horrible death”.

Police are also seeking information from anyone who saw a man walking along the highway, carrying a dark suitcase, about six to eight weeks ago.

“The man has been described as being aged about 60, of Caucasian appearance, average height, lightly built, clean cut and neatly dressed. He was not a local,” Detective Superintendent Bray said.