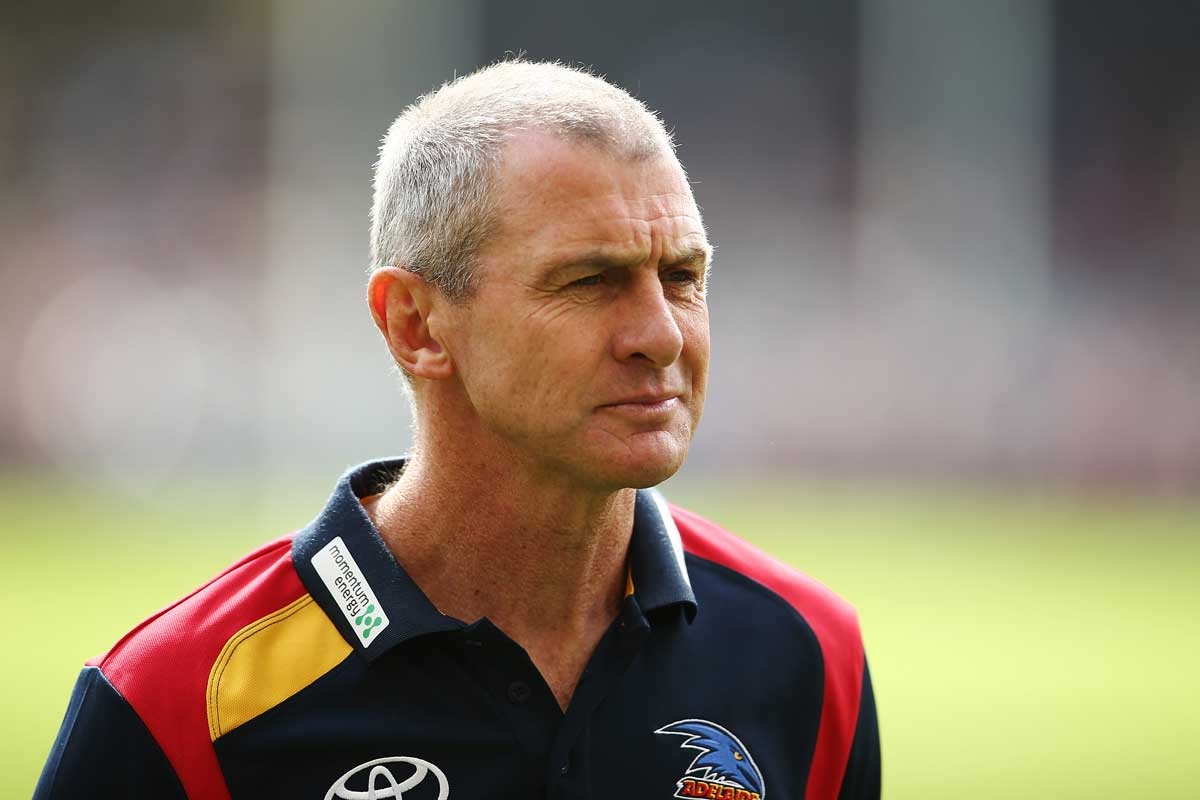 Adelaide police have charged Phil Walsh’s 26-year-old son with his father’s murder after the Adelaide Crows coach was stabbed to death in his home early Friday morning.

Cy Walsh was remanded in custody during a bedside hearing at Flinders Medical Centre on Friday. He made no application for bail and is due to reappear in court on September 15. Earlier he had reportedly undergone a psychiatric assessment.

Police and ambulance crews were called to the Walsh family home in Bungey Avenue at Somerton Park around 2am following reports of a domestic dispute.

Paramedics treated the coach’s multiple stab wounds at the house, but he died at the scene. Walsh’s wife was taken to hospital to be treated for a non-life threatening knife wound, reportedly to her leg.

Phil Walsh’s death forced the AFL to cancel Sunday’s scheduled clash between the Crows and Geelong at Adelaide Oval. All other matches will go ahead.

Crows chairman Rob Chapman said he took a phone call from Adelaide police at 3:30am Friday.

“It’s a phone call no one ever wants to get,” Chapman said.

“You’ve got to get straight into crisis management and this is a crisis unprecedented, there is no rule book.

“We’re not going to get over it anytime soon.

“We started a journey under Phil Walsh … it’s a journey the club are determined to see through.

“To me he was the coach of the football club you want. He is a coach, he is a leader of men

“Unambiguous, straight up and down … inspiring, (he) genuinely cared.”

AFL CEO, Gillon McLachlan, told a press conference it would have been unfair to expect “the young men” of each side to play the game. Premiership points would be split between the two clubs.

“Our game is in mourning today and I speak for the whole of the AFL,” McLachlan said.

“There are not many words of comfort today for those who feel this terrible loss.

“To his family we can only say that your loved father and husband is in all our hearts.”

McLachlan said the decision not to play Sunday’s game was taken as a mark of respect for Walsh.

“While playing footy can be part of the grieving process we are of the view it is not fair to ask the young men of Geelong and Adelaide to play,” McLachlan said.

Meanwhile, a South Australian police spokesman said that as a result of an argument at the Walsh family home “both Mr Walsh and his wife received wounds”.

Paramedics tried to revive the Adelaide coach at the scene but their attempts failed. Mrs Walsh was recovering from her wounds in hospital.

The knife used in the attack was found at the scene, the spokesman said.

Crows players gathered at the club’s headquarters at West Lakes to receive the terrible news.

‘Fiercely protective of his family’

Walsh, renowned for his hard-nosed approach to football, was also fiercely protective of his children’s identities.

“I won’t tell you their names or anything like that. And I won’t be in pictures with them,” he had told media after his appointment as Crows coach in October last year.

Before the Crows, he had resisted bidding for AFL head coaching jobs, content to be one of the game’s most sought-after assistants.

One of the reasons he finally took on the top job was that he believed his son and daughter were old enough to handle the stress.

“My kids are older so there’s not those sort of pressures,” Walsh told AAP in February.

“When you’re involved in footy your kids live and die by it a little bit as well, but the kids now are a lot older, 26 and 22.

“I don’t feel that sort of responsibility in relation to having an effect on their lives quite as much.”

A long career in football

Phil Walsh played 122 VFL games for Collingwood, Richmond and the Brisbane Bears between 1983 and 1990.

He started out as a strength and conditioning coach at Geelong in his post-playing career before becoming assistant coach at Port Adelaide in 1999, where he helped the Power to a 2004 premiership.

He moved to the West Coast Eagles as assistant coach in 2009 before returning to the Power in early 2014.

He was appointed Crows coach in the 2014 off-season, replacing the sacked Brenton Sanderson.