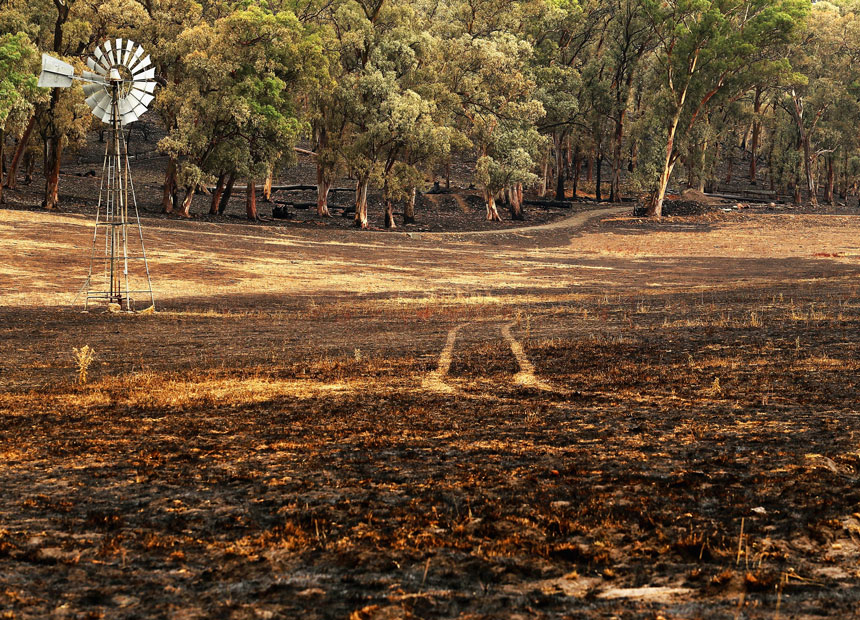 South Australia could experience its heaviest rainfall in 30 years, the weather bureau has warned, just hours after authorities announced a bushfire burning north-east of Adelaide had been contained.

The weather bureau’s John Nairn said up to 200 millimetres of rain was expected in parts of the state, and strong winds and flooding have been forecast.

“The story is shifting quite substantially now from a fire environment to one in which we’re worried about how much rain we’re going to get,” Mr Nairn said.

He said the last time the state has seen such rainfall was in 1984.

The rain was expected to develop north of the state near Cooper Pedy and travel south towards the eastern Mount Lofty Ranges.

“We’ve got a fresh low that will form late Friday into Saturday out near, say, Cooper Pedy and that low will track south,” Mr Nairn said.

“And as it tracks south it will draw and refocus the very humid air that we’ve got coming out of the north-east, as well as the tropical air mass that’s coming out of the Pilbara and bring the moisture down the ranges and across a reasonably wide area.”

Mr Nairn said rain was expected to be fairly continuous in Adelaide during the period.

“But with easterly winds, the focus will be about the ranges,” he said.

“We could easily see falls in the order of 25 to 50mm in Adelaide itself, but with the focus being on the ranges and to the east of the ranges, that will be where we see our higher falls.”

The State Emergency Service (SES) warned campers in the Flinders Ranges in the state’s mid-north should consider leaving before the rain hits.

In the 24 hours to 10:00am (ACDT), there have been more than 64,000 lightning strikes across the state, but the lightning was not forecast to continue.

While the rain provided some assistance to crews fighting a bushfire north-east of Adelaide, lightning strikes fanned by strong winds sparked about 70 fires across the state yesterday afternoon, but most were quickly extinguished by crews.

Winds brought down trees in parts of the state overnight, and the SES said it had more than 70 calls for help with reports of minor flood damage.

SA Power Networks said about 20,000 customers have experienced power interruptions due to the storm since yesterday afternoon.

Outages have occurred in the Adelaide Hills, Glenelg, along the far west coast, on Kangaroo Island, and in the state’s far north and south east.

The 240-kilometre perimeter of the Adelaide Hills bushfire is now 100 per cent contained and the major emergency declaration has been lifted.

Premier Jay Weatherill has pledged $1 million worth of assistance, while Prime Minister Tony Abbott announced an Australian disaster recovery payment of $1,000 per adult and $400 per child for bushfire victims who have lost their homes or have had their homes severely damaged by the fires.

While the fire has been contained, the Country Fire Service has warned the threat in the area remained with falling trees still a hazard.

About 600 firefighters from New South Wales and Victoria who have helped fight the fire will begin returning home today.

About 132 people required treatment from SA Ambulance Service and a number of animals and livestock were killed in the fires.

Although the bushfire does not pose a threat to life or property at this time, people in the area are advised to check and follow their Bushfire Survival Plan and monitor local conditions.

Investigations into the cause of the fire are ongoing as forensic investigators continue to examine a Sampson Flat property, in particular an area surrounding an incinerator.

A mix of extreme weather over the weekend will have Victorian emergency crews on high alert.

A severe thunderstorm warning has been issued in the western part of the state for Thursday afternoon and will expand to include the rest of Victoria for the rest of the weekend.

Bureau of Meteorology senior forecaster Steven McGibbony said heavy rainfall on Friday could lead to minor flooding over the weekend.

“The bureau has issued weather warnings for thunderstorms and heavy rain which may lead to flash flooding,” Mr McGibbony said on Thursday.

Conditions could either ease the fire threat or make matters worse as the ground becomes slippery and trees are more likely to fall, Fire Services Commissioner Craig Lapsley told reporters on Thursday.

“We still have major fires running in the Big Desert, Little Desert and in the Rocklands area near Horsham,” Mr Lapsley said.

“Rain in these areas will actually make firefighting efforts more difficult and complex.”