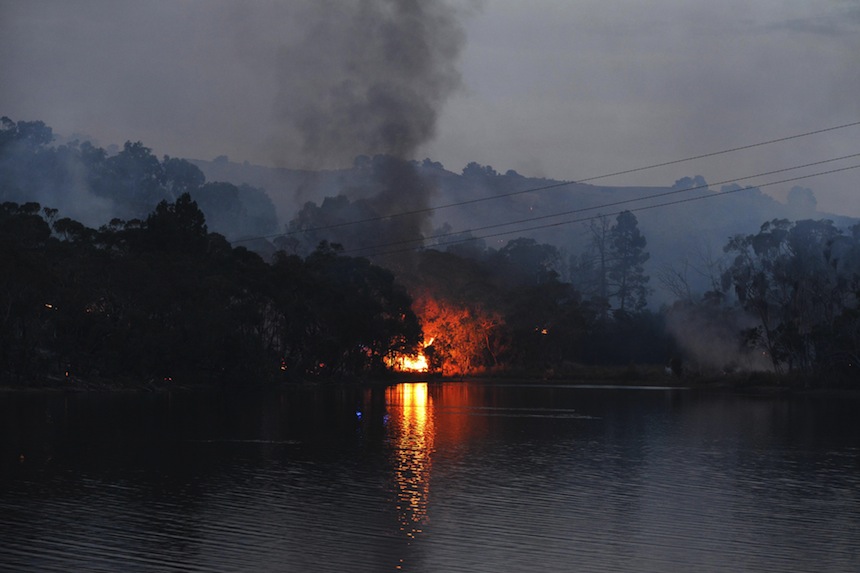 Fire crews continue to battle a four-day old blaze in the Adelaide Hills, described as the worst in 30 years, before more hot weather hits South Australia from Tuesday.

Twenty-nine people, mostly firefighters, have been injured and at least 26 homes have been confirmed lost in what has been described as the worst fire in the region since the Ash Wednesday blaze in 1983 in which 28 people died.

More than 11,000 hectares of scrub have been blackened, as almost 600 firefighters fight to bring the fire under control, but no lives have been lost.

• Dogs and cats perish as blaze sweeps through hills
• Two missing found safe, fears up to 32 homes lost
• Fake firefighters in SA scam
• Bushfire class action: What it means for victims and the power company

The Country Fire Service downgraded its emergency warning to a watch-and-act message on Sunday, and said the blaze did not expand significantly on Monday, but continued to burn out of control.

Greg Nettleton from the CFS said the top priority for firefighters was to prepare for possible catastrophic weather conditions expected to hit on Wednesday.

“We’re watching very closely the weather that is coming across from the west. We are going into a warming pattern today. Tomorrow it’s 38 degrees and the forecast for Wednesday is 38. The winds will swing around to the north,” Mr Nettleton said.

“At the moment I think they’re predicting [winds of] about 35kph. That’s enough given the dryness of the country for the fire to spread, so our number one priority is to secure the outer perimeter of that large fire so it doesn’t impact on further communities.”

Premier Jay Weatherill said crews would increase their efforts against the bushfire from the air in a bid to get some control before the weather conditions worsened.

With more than 20 roads into the fire zone remaining closed, many frustrated evacuees have been prevented from returning to their homes.

Mr Weatherill cautioned residents against trying to return to their homes too soon, saying there were serious concerns about trees falling on vehicles in the fire zone.

Thirty-seven families have been provided with temporary accommodation, he added.

Mr Weatherill said the fire was continuing to burn and there remained a “very clear danger”.

“There are number of flare-ups across the fire ground,” he said.

“Trees continue to burn and may fall. Fires from flare-ups can burn rapidly and be erratic, so be aware of fire danger in your area on an ongoing basis.”

Police have arrested a 45-year-old Fairview Park man at Tea Tree Gully for repeatedly trying to breach a road block.

Among the communities still considered at risk were those at One Tree Hill, Humbug Scrub, Mount Crawford, Kersbrook, Birdwood, Gumeracha, Kenton Valley, Cudlee Creek and Inglewood.

Police are investigating if the fire was sparked by an incinerator on a property at Sampson Flat, though the tenant has denied the suggestion.

Members of the community have banded together in support of the bushfire victims, flooding a relief centre at Golden Grove with donations of food, water and bedding.

Jesse Wakeman, 27, who was left stranded when roads to his Kersbrook home were closed, said he was staying with friends until he could return home, and even long lost acquaintances had offered support.

“We really don’t know what we’ve got left, as far as stock and the house itself,” he told AAP.

“But everyone has been really, really supportive.”

About 40 dogs and cats perished on Saturday morning when the blaze destroyed large parts of a boarding kennel and cattery in Tea Tree Gully.

A recovery hotline has been established and short-term accommodation and special grants of up to $700 have been made available to assist those affected.

While South Australia braced for worsening conditions, Perth sweltered through its first extreme hot weather of the year.

At noon on Monday, temperatures in the city hit 42.2 degrees, forcing office workers and shoppers to take shelter in air-conditioned buildings.

The Department of Fire and Emergency Services issued a watch and act for people in the Shire of Mundaring, to the east of Perth.

Aerial water bombers have been called in to try to bring the flames under control.

Earlier, seventy firefighters brought a blaze in Roleystone, which started on Sunday, under control, as well as another fire in the Shire of Busselton.

Meanwhile, an emergency warning for the communities of Mockinya, Nurrabiel, Telangatuk and Toolondo has been downgraded to a watch and act.

It was earlier feared that private properties north of the Black Range State Park and the Mount Talbot area could be impacted.

CFA deputy incident controller in Horsham Russell Manning said the fire was started on Saturday by lightning in the Wimmera district.

Three separate fires in the Little Desert Park have burnt almost 4000 hectares since Sunday, but do not pose a threat to homes or lives.

The state’s north is forecast to be sunny on Tuesday with south to south-easterly winds. Rain is not forecast until later in the week.

The fires come two days after a 5000ha blaze at Moyston destroyed two homes and partially burnt others.

Farmers lost four sheds and countless livestock, before the fire was brought under control.