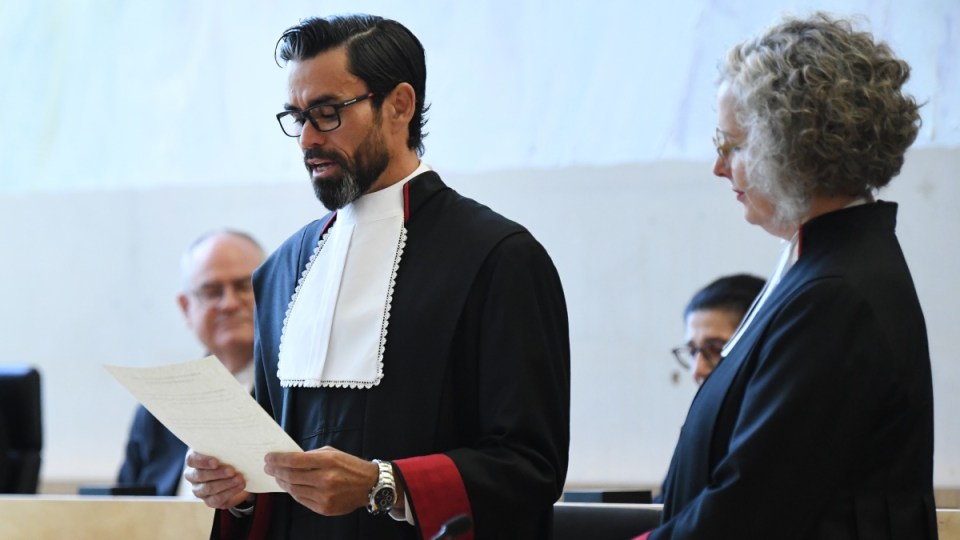 As a young man Lincoln Crowley may not have known if the Supreme Court of Queensland existed, but he understood what was fair and what was not.

The Warramunga man has become Australia’s first Indigenous Supreme Court judge after being sworn in in Brisbane on Monday.

Justice Crowley says he didn’t take any classes in legal studies at high school in Charters Towers in the 1980s.

Nor did he spend much time thinking about the court he would sit on. In fact, he doesn’t think he even knew it existed.

“But I knew what was fair and what was not,” the new judge told his swearing-in ceremony in Brisbane.

“I knew it was not fair when I applied for a part time job after school at a local shop and later found out that the manager threw my application in the bin, while saying: ‘They’re Aboriginal, aren’t they?’

“And I knew it was not fair when teachers suggested that I wouldn’t amount to anything and when others judged me, and my worth, and potential without even knowing me.”

Justice Crowley was inspired by his father, a retired army officer and one of the ADF’s first Indigenous majors.

His dad encouraged his children to be educated, work hard and make something of themselves.

Justice Crowley says he always resisted measuring himself with “someone else’s yardstick”.

He was admitted to the bar in 2003 and worked with Aboriginal and Torres Strait Islanders Legal Service, and the NSW Crown Solicitors Office.

Justice Crowley has been a Crown prosecutor for the Commonwealth Director of Public Prosecutions in Queensland.

He was a private counsel for the NSW DPP, and served as Senior Council Assisting with the Disability Royal Commission.

Mr O’Brien says for too long Indigenous Australians have lacked a voice within the legal system.

The senior judiciary hasn’t reflected the import role of First Nations people as the custodians of the country, he said.

“Your honour’s elevation to become the first First Nation superior court judge in this land is an important step in a much longer process to ensure that this historical role is rectified,” Mr O’Brien said.

“I can tell you right now, the barristers of Queensland are extremely proud that you are one of our own.”

Back when he was studying law, Justice Crowley distinctly remembers feeling he wouldn’t fit in in the legal profession, which seemed like an exclusive club at the time.

“Times have changed, though,” he added.

His appoint as a judge comes 30 years after Margaret White became the first female supreme court judge in Queensland, and since the momentous Mabo land rights decision.

“With the appointment of Justice Crowley, we add another person of such qualities to our bench and we reinforce the importance of equality before the law,” Justice Bowskill said.

While he hopes one day that the appointment of an Indigenous judge isn’t remarkable, Justice Crowley said some have asked on social media why his “Aboriginality” is such a big deal today.

“The answers to these questions are pretty obvious: diversity matters,” he said.

He said the administration of justice was advanced by having judges who represented Australia’s diverse communities and their life experiences.

He also hopes his appointment inspired other First Nations people to take up the legal profession.

“I will strive to do justice in every case,” Justice Crowley said.

“To my mind that is the most important objective in the law, and the one thing our community expects judges of this court will deliver.

“In the end, justice is what it’s all about: always was, always will be.”