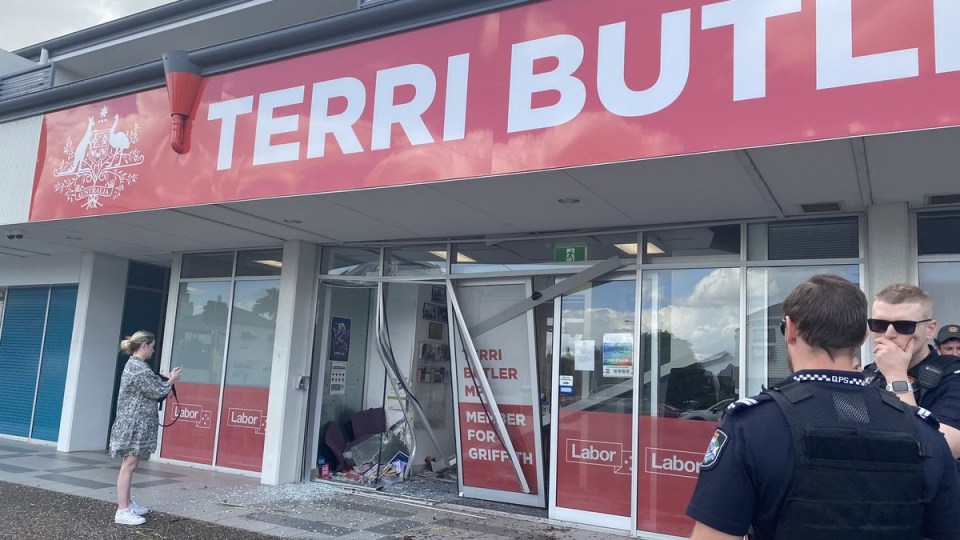 A vehicle has ploughed into the Brisbane office of federal Labor MP Terri Butler. Photo: Twitter

A car has crashed into federal Labor MP Terri Butler’s electorate office as the campaign heats up in the south Brisbane seat.

The vehicle ploughed into the front of the Griffith MP’s office on Old Cleveland Road, Greenslopes, just after 1pm on Thursday.

The crash broke the front door frames and shattered windows, leaving glass fragments scattered over the carpet inside the office.

The car was driven off and the driver is yet to be found.

“Thanks for your concern, everyone,” Ms Butler tweeted.

“We don’t know the condition or whereabouts of the driver.”

Police are investigating whether the crash was deliberate or not.

Labor leader Anthony Albanese, on the campaign trail in NSW, said he had spoken to Ms Butler and the circumstances of the crash were still unclear.

“It’s good news though, that no one of Terri’s staff or indeed anyone who is in the vicinity of what is a very busy precinct has been hurt,” he said on Thursday.

Greens candidate for Griffith Max Chandler-Mather said the incident sounded awful and he hoped everyone was OK.

The crash came hours after the Greens released polling indicating Ms Butler may be battling to hold her seat.

The door-to-door polling of 25,000 voters indicates a 7.2 per cent swing to the party in Griffith.

That would put Mr Chandler-Mather just above the 31 per cent primary vote Ms Butler won in 2019.

Mr Chandler-Mather said a swing would be the result of his party’s biggest and most comprehensive grassroots campaign for a lower house seat.

The Greens are preparing for a stoush with the Brisbane City Council over its restrictions on election yard signs, which the party says denies residents freedom of expression.

Under the rules, signs can be no larger than 60 centimetres by 60 centimetres, with limits of one per property and a maximum of 150 per federal electorate.

Mr Chandler-Mather said the Greens would ignore the laws as they were undemocractic and denied people freedom of expression.

“A 150-yard sign cap on a federal electorate, which has about 120,000 residents, would allow less than 1 per cent of households allowed to have a yard sign,” he said.

“That is so obviously ridiculous.”

Brisbane LNP Councillor Kim Marx said the law applied to all parties equally and would be enforced during the campaign.

“The law strikes an appropriate balance between allowing freedom of expression while preventing a political signage free-for-all that residents strongly oppose,” she said.