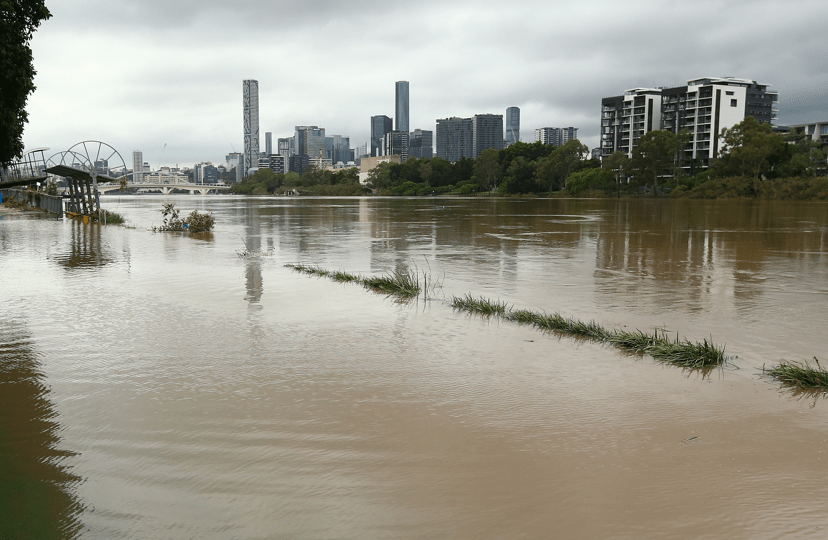 The Brisbane River is still breaking its banks and the flood debris keeps coming. Photo: AAP

Rubberneckers have been warned to avoid “disaster tourism” and stay off the Brisbane River, with the clearing of debris caused by devastating floods expected to take weeks.

Maritime authorities say more than 1000 tonnes of debris have already been removed from Brisbane waterways after the “wettest February in Queensland in 130 years” caused deadly flooding.

But Maritime Safety Queensland general manager Kell Dillon says more than 150 objects are still to be dragged from the bottom of the river, impeding important shipping channels.

He warned people “taking selfies” to stay off the water, saying they are interfering with authorities working hard to restore the Port of Brisbane to its full capacity.

“There is still a lot of debris on the surface or just below, the currents are still high and the water is very dirty,,” he said on Sunday.

“People on the water obstructs contractors and our staff from getting on with the important job of clearing the river.

“What we don’t need is disaster tourism, people going around taking selfies with damaged equipment in the background.

“Stay off the river, it is just too dangerous.”

Mr Dillon said they had prioritised clearing shipping channels around the Port of Brisbane that created up to $50 billion in trade a year for Queensland before the floods.

He said they still faced a monumental task despite already removing tonnes of surface debris including “pontoons, yachts, jet skis, tree stumps, all kinds of material”.

“It’s hard to know exactly (when the river will be cleared) … I would suggest weeks yet,” Mr Dillon said.

“We are up to about 1100 tonnes of material cleared off the river surface.

“And we are finding a lot on the bottom. We have about 160 unknown objects from Hamilton down to the port that we have to clear – it is obstructing shipping.”

But Queensland Treasurer Cameron Dick said there were already encouraging signs for the Port of Brisbane which boasted about 2500 ship movements a year – and 20 a day – before the floods.

“We are still having problems with some of the debris on the sides of the river which means some of the large container vessels…can’t access the port.

“But the port is back to operating 24 hours a day. We are heading in the right direction.”

The clean-up is continuing on land with the state government encouraging interstate tradies to relocate and help after floods devastated thousands of homes and businesses and killed 13 people.

There have been $1 billion worth of insurance claims since the southeast Queensland disaster.