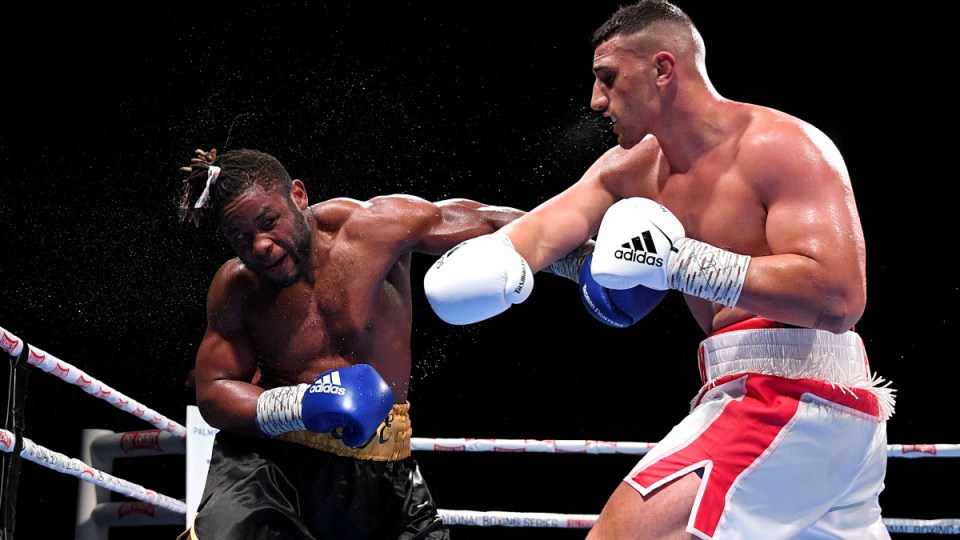 The father of Australian heavyweight boxing champion Justis Huni says it is lucky no one was killed when their home was shot up in a drive-by attack in southern Brisbane.

Five bullets were fired into the 23-year-old’s property on Goorong Street in Sunnybank Hills about 4am on Thursday.

No one was hurt by the hail of gunfire, which shattered windows in the front lounge room. But there were up to 10 people home at the time of the attack, including a six-month-old and an eight-year-old.

Mr Huni’s father Rocki said the family was in shock after bullet holes were found near where his wife usually sat with their baby grandchild.

“If it had have been half-an-hour later, it probably would have got my wife or my grandchild because that’s where they sit,” he said.

“I suppose in a way we’re pretty fortunate that we’re not dealing with a more serious [situation].”

Despite the terrifying ordeal, the boxing champ stuck to his rigorous training schedule in the lead-up to his heavyweight bout against Joe Goodall at Brisbane’s Nissan Arena scheduled for next week, with the winner touted for a potential world-title shot.

“My focus is still on the fight next week,” Justis Huni said.

“Obviously getting your house shot at, you’re going to be a little bit shocked. But after it happened we still went to training, still got the sparring done.

Asked whether the attack could be linked to boxing-related organised crime, Rocki Huni said the family was still searching for answers.

“My wife and I, we were going through in our heads, ‘have we done anything to cause this’. We can’t come up with anything. It’s just out of the blue,” he said.

“There could be someone out there that doesn’t want to see Justis succeed. I’m really worried about that. At the moment I’m just guessing.

“I hope that with all the cameras that we have on the street, we’ll find something that’ll help us.”

Justis Huni’s promoter Sean Lawson said the Queenslander’s preparations had not been derailed for the upcoming contest with Goodall.

The undefeated Australian pair were initially due to fight in February before a second COVID-19 infection for Huni put the event on hold.

Huni, who has won all five of his professional fights, was expected to contend for an Olympic medal in Tokyo last year until a hand injury, aggravated in a 10th-round stoppage victory over Paul Gallen in June 2021, ruled him out.

He has not fought since then, contracting COVID during a US training camp and then again on his return to Australia.

Goodall, a Commonwealth Games silver medallist in 2014 and world amateur bronze medallist in 2017, has recorded seven wins and a draw since turning professional in 2018.