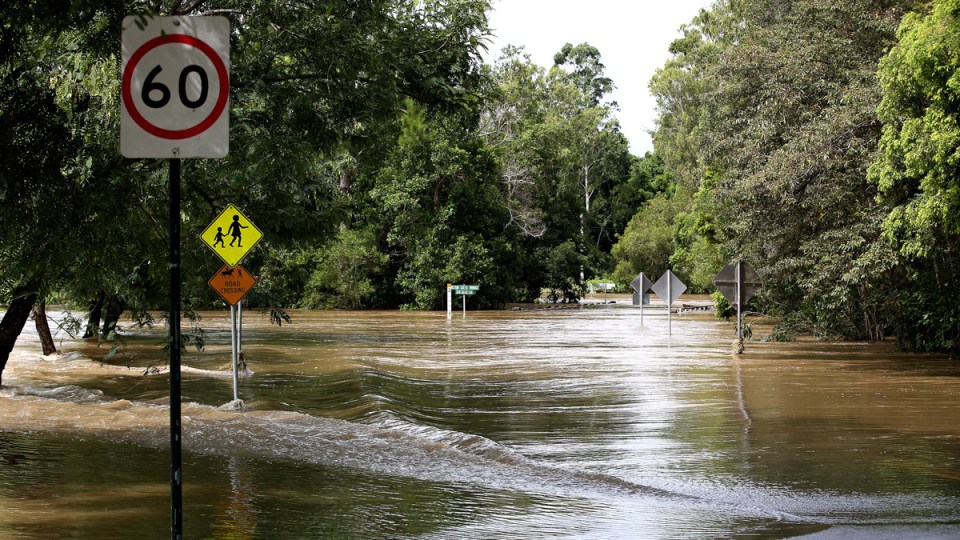 Clean up and recovery is underway across Queensland as the floodwaters slowly subside. Photo: AAP

A ‘gutwrenching’ clean up and recovery is underway across Queensland as the floodwaters slowly subside from the second major rain event this year.

Homes and businesses across the state have been impacted and a woman in her 30s died in floods near Mackay.

Police continue to search for a missing man in the Brisbane River on Sunday and authorities also fear for the occupants of an abandoned car found between Ballandean and Stanthorpe.

However, the focus shifted to the Lockyer Valley recovery on Monday after floodwaters swamped the town’s main street surrounding farmland.

While the immediate cost is still being counted, Australians have been warned the price of fresh fruit and vegetables will increase in the wake of the disaster.

Farmers who risked planting after the February deluge have lost entire crops and face financial ruin as ’90 per cent’ of insurance claims have been rejected making recovery even more challenging.

“A lot of those farmers were hoping and depending on that (insurance payout),” Cr Milligan said.

“We will have farmers that have no intention to replant. You have people that have just lost absolutely everything and they will be wondering is it all worth it?

“That is a huge concern and I don’t know how quickly they will recover. I don’t know what that will mean for us as a state, as a nation … for every mum and dad and a couple of kids wanting to buy their produce from the supermarket.”

For a community that has battled years of drought and now floods, Cr Milligan said the strain had taken a toll as exhausted locals tackle yet another major clean up.

“The last few days have been very at times, gut-wrenching, soul-destroying and quite emotional,” Cr Milligan told reporters.

“I think it would be fair for me to say and I need to say it as mayor,  that we’re a bit fatigued.

“Whilst the waters have subsided … I really believe that it’s the emotional side of things and the build back and the cleanup – I think, I  think that’s the really tough stuff.”

Police Minister Mark Ryan said the state government would work with the community to repair and rebuild.

“There have been a number of businesses and residents impacted in this region and it breaks your heart to see that people are impacted to the extent that they are,” Mr Ryan said.

“Whilst you can always rebuild, it’s the emotional toll that disasters like this have on people’s lives.

“I wanted to reinforce to everyone that, you know, the authorities, the council’s the state government, the federal government, we all work together here to support people in the recovery effort.”

While the upper trough that triggered the deluge has moved offshore, light showers will hang around during the week before another weather system develops on Friday.