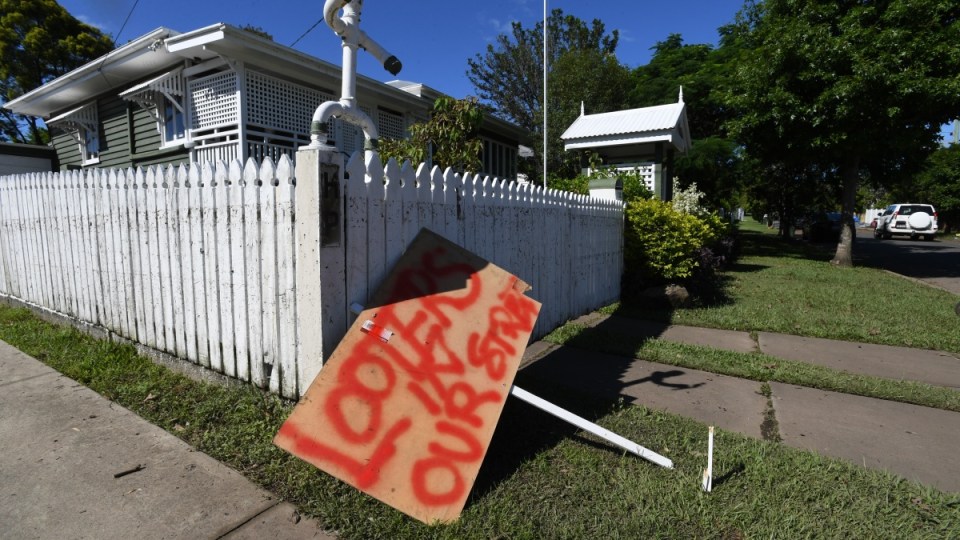 A sign, outside a flood-affected property in Brisbane, warns of looters. Photo: AAP

A suspected flood looter is still missing after he jumped into the Brisbane River to escape patrolling police officers in the city’s west.

Police doing an anti-looting patrol saw the man with a large build acting suspiciously at Macquarie St, St Lucia, about 3.45 am on Tuesday.

When they tried to talk to him, he ran away and officers believe he jumped into the river.

Officers started searching the riverbank while swift-water rescue crews began looking for the man, who was wearing a singlet and long pants, in the water.

Police Commissioner Katarina Carroll said the man is still missing more than a day after he was last seen by police.

“There is a search on currently for him and that will continue throughout the day, but certainly we have not found him yet,” she told ABC Radio on Wednesday morning.

A special taskforce called Uniform Nash involving about 80 to 100 officers has been patrolling flood-hit areas in the state’s southeast, particularly where residents haven’t been able to return to their homes.

The operation is designed to disrupt and prevent opportunistic theft.

Ms Carroll said 10 people have been charged with flood looting.

Those found guilty of stealing by looting in a natural disaster face up to 10 years in prison, which is double the sentence for common burglary, she said.

“It’s viewed very differently, a lot more seriously, if people are doing this during a time of disaster,” Ms Carroll said.