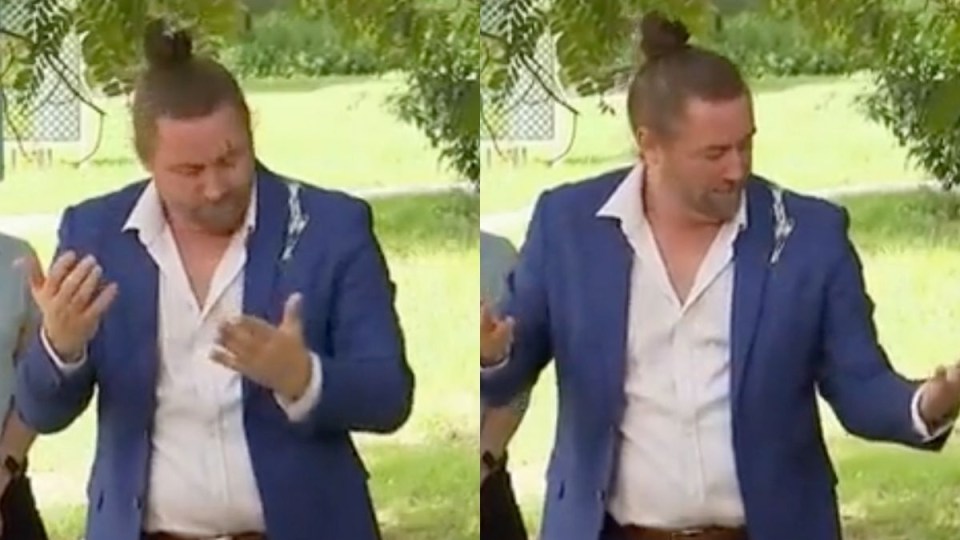 Interpreter Mikey Webb was hit by a generous amount of poo droppings during a Queensland government press conference. Photo: Twitter

An Auslan interpreter has been praised for his “deft” response, after taking an unfortunate hit from a hefty load of bird poo during a live media briefing on Wednesday.

The icky incident came as Deputy Premier Steven Miles answered questions about the flood crisis in south-east Queensland when he was interrupted by interpreter Mikey Webb.

“Well, s—,” a surprised Mr Webb said, upon discovering his left shoulder and forehead had been splattered with bird poo.

The briefing came to a temporary halt while Mr Webb removed his jacket and wiped himself down with a handkerchief provided by a kindly police officer.

He quickly regained his composure in time to finish the rest of the conference. Mr Miles noted he would answer any remaining questions “quickly” to avoid any further interruptions.

The feathered culprit responsible for the untimely interruption was later outed by Premier Annastacia Palaszczuk.

“Nothing stops our fabulous Mikey. He stands by my side, he stands by Queensland’s side,” she tweeted.

Mr Webb is no stranger to being hampered in his work by errant wildlife.

He was also present for during a Queensland COVID briefing in December, which paused when a huntsman spider began scaling Health Minister Yvette D’Ath’s leg.

He and Queensland chief health officer John Gerrard searched for the offending arachnid as Ms D’Ath explained her fear of huntsmen.

“This proves how controlled I can be. I don’t like huntsmen but I’m gonna keep going, and I’m gonna pretend I don’t have a huntsman on me right now,” she said.

“We’ve got COVID and we’ve got huntsmen.”

Ms D’Ath later tweeted to confirm “no spiders were harmed during the press conference”.