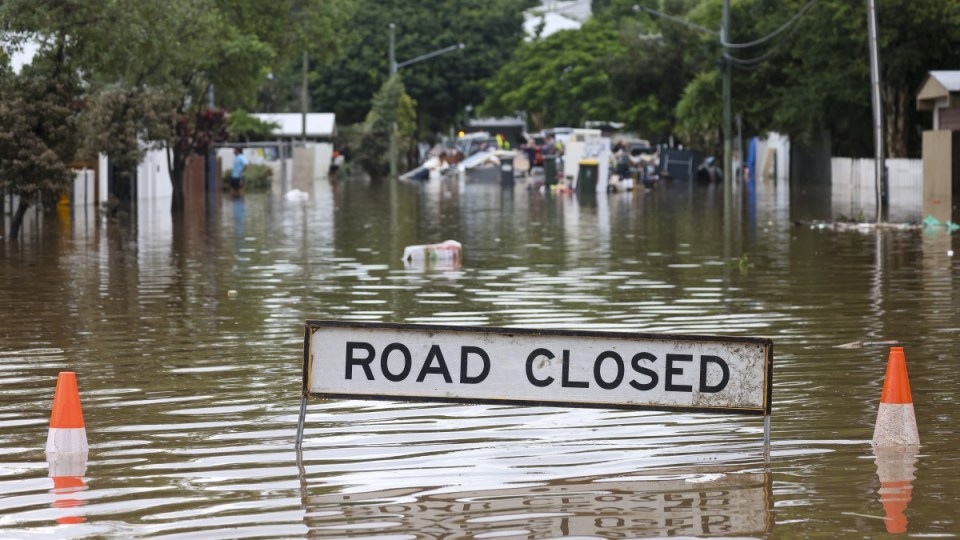 Floodwaters rose again in parts of Brisbane after storms on Thursday morning – with worse yet to come. Photo: Getty

Towns were being evacuated and schools closed in south-east Queensland on Thursday afternoon, ahead of dangerous thunderstorms that could bring more “life-threatening floods”.

Premier Annastacia Palaszczuk urged parents to collect their children from schools from north of Brisbane to Bundaberg, as soon as it was safe to do so, on Thursday.

“These are unprecedented times,” she said.

“It is extremely unstable weather conditions and, as a precaution, we would like our people to collect the children when they think it is safe to go out on the road and do so.”

The renewed alarm for south-east Queensland came as 500,000 people in NSW were warned to evacuate or be ready to evacuate as the epicentre of the flood crisis moved south. Greater Sydney, the Hunter and the NSW central coast were expected to be battered with intense rain on Thursday afternoon.

There was moderate to major flooding along the Hawkesbury and Nepean river systems. Weather bureau forecaster Helen Kirkup said the entire east coast was affected.

“Still a lot of showers around the region. We’ve got heavier ones up towards the central coast and north of Newcastle and they are going to continue through today, overnight, and hopefully easing off during tomorrow.”

The weather bureau later amended its warning for more storms, lightning and torrential rain in Queensland, saying that Friday would be the worst day. “Dangerous and potentially life-threatening” storms would bring more rain to already saturated catchments in the state’s south-east, the Bureau of Meteorology said.

Many schools were expected to remain closed in the storm area on Friday.

On Thursday, the town of Grantham was being evacuated ahead of possible flash floods. The nearby Lockyer Valley had 80 millimetres of rain in 24 hours.

“The Grantham siren was activated, to really prompt people to temporarily evacuate any of those low-lying areas. It is a precautionary but a really, really important safety measure,” she said.

“We’ve already had 80 millimetres there, so we would only need one more severe storm system over that, which would cause issues there, and that’s the same right across the areas that have been mentioned today,” he said.

The first storm cells struck overnight after the worst floods in the decade, which have killed nine people and damaged more than 17,000 homes and businesses.

Cyclonic wind gusts of up to 93km/h brought down trees and power lines and sparked another wave of 360 calls to the SES for help.

“I’m asking people tomorrow to think about not being on the roads and staying at home, the schools will open for children of essential workers,” she said.

“I’ve lived in Brisbane essentially all my life and I haven’t seen storms and floods like this all being thrown at us at once.

“We’ll get through it together. ”

BOM forecaster Laura Boekel said the thunderstorms brought a chance of more flooding and flash-flooding across the south-east.

“This is a very dangerous and potentially life-threatening situation for south-east Queensland,” she said.

She said the Lockyer and Bremer rivers and Laidley and Warrill creeks were likely to flood. There would also be moderate flooding at Ispwich during the day and major flooding by Thursday night.

Earlier on Thursday, six-centimetre hail pummelled Windera, north of Brisbane, while stones of a similar size smashed into the southern town of Inglewood. Brisbane city had 48 millimetres of rain in just half an hour.

“That’s a severe storm with some very intense rainfall. And what we have seen can indicate what we can expect for the rest of the day,” Ms Boekel said.

Ms Boekel said the main concern for Brisbane was not the river, but the creeks where there was potential for flash flooding.

“They cannot take any more rainfall. They are what we call saturated.”

Evacuation orders and warnings remain in place for about 500,000 people in NSW, as disastrous floods continue.

Some 130,000 households in the path of the overflowing Warragamba Dam were told on Thursday afternoon, however, that the water surging out of the dam wouldn’t come at the same rate as devastating floods in 2021.

On Wednesday it had been predicted about 600 gigalitres of water would spill from the dam. But with less rainfall in the catchment area than expected, WaterNSW announced on Thursday afternoon the spill forecast had been revised down to between 300-350 gigalitres a day.

That’s below the 440 gigalitres a day that surged out of the dam during flooding last year.

“This prediction is still subject to advice from the Bureau of Meteorology and will be ultimately determined by the intensity of the rain event and the inflows generated,” WaterNSW said on Thursday.

Most dams in Greater Sydney have spilled, including all dams in the Upper Nepean region.

Residents were told on Wednesday night to evacuate if they were affected by the March 2021 flood, with the expectation that the dam would spill more water and the floods would be worse than the year before.

Several rivers are still above their major flood level or approaching it.

Moderate to major flooding is expected in western Sydney along the Hawkesbury, Nepean and Georges rivers, Colo and Macdonald rivers at Menangle, North Richmond, Penrith and Windsor, with dozens of suburbs on high alert.

Further severe weather is expected across NSW, particularly along the coast.

The Bureau of Meteorology said rainfall levels could hit a peak of 250 millimetres and warned of life-threatening flash flooding and damaging winds with peak gusts in excess of 90km/h.

Tens of thousands of people living in Sydney’s west, north-west and southwestern suburbs including Windsor, North Richmond, Camden and Milperra, have been ordered to flee to safety.

More than 300 schools across the state are closed because of flooding.

The BOM warned of renewed river rises from thunderstorms on Thursday afternoon in areas on the mid-north coast and Hunter region already hit by flooding.

There are also warnings of abnormally high tides and damaging surf warnings for most of the NSW coastline, with east-facing beaches at greater risk.

Coastal erosion is likely and low-lying areas could also be affected by tidal flooding.

‘Extremely unstable’: Qld to be smashed by dangerous storms