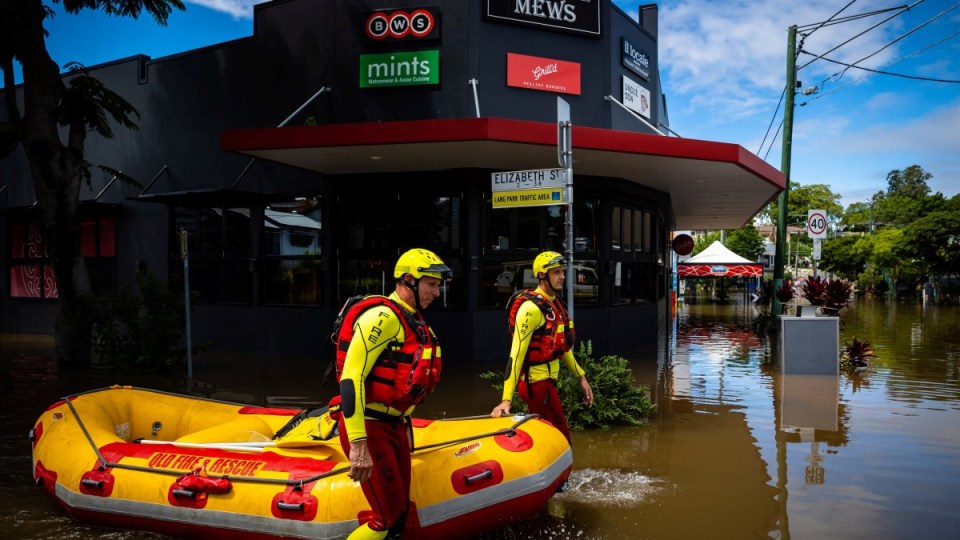 There are “grave concerns” for two men still missing in south-east Queensland’s floods, which already have killed eight people and damaged at least 18,000 homes in the region.

There were blue skies over much of the region on Tuesday morning but major flooding was under way on the Brisbane, Logan, Bremer and Mary rivers, and Warrill Creek after the torrential downpours of the past week.

Police Commissioner Katarina Carroll said two men were still missing. One fell from a boat into the Brisbane River on Saturday and another was washed away in his car near Glen Esk on Sunday.

“We do hold great concerns for two missing people,” she said on Tuesday.

Queensland Fire and Emergency Services made another 16 rescues and responded to 256 calls for help overnight and into Tuesday morning.

QFES Commissioner Greg Leach said there had been 630 rescues and 10,000 calls for help since the rain began last Tuesday – and there was still a backlog.

“We appreciate the patience of the public while we get to those calls,” Mr Leach said.

“Of course, if you have a life-threatening emergency please dial triple-zero, and we’ll get resources to you as quickly as we can.”

Authorities’ immediate concern is at Waterford West and Parklands on the Logan River, which is peaking higher than it did when ex-tropical cyclone Debbie hit the region in 2017. It was expected to inundate up to 300 homes on Tuesday afternoon.

The Mary River is dropping at Maryborough after peaking at 10.3 metres on Monday night, five centimetres above the 2017 flood level but below the city’s levee.

More than 15,000 homes in Brisbane and 3600 in Gympie have been damaged by the floods and almost 40,000 properties were without power on Tuesday morning.

More than 800 schools also remained closed across Queensland’s south-east and about 600 roads were still cut by floodwaters.

In addition, Coles and Woolworths said some of their supermarkets in flood-hit areas of Queensland and northern NSW had been closed or had their hours cut. Both have imposed purchase limits on many items to help mitigate shortages.

Fresh produce shelves have been emptied at many supermarkets in south-east Queensland, with retailers warning shortages might last up to a week.

Cornetts IGA CEO Graham Booysen said the company’s 35 stores throughout Queensland would be re-stocked as soon as possible.

“I think within the next week or so we should be able to start seeing stock going out to those stores,” Mr Booysen told the ABC.

“I don’t think it’s going to be dramatic, I think there’ll be a few lines that will be an issue but we’ll get those back into stock pretty quickly.”

Elsewhere, Brisbane City Council is already recruiting volunteers for its “mud army” to help when the clean-up begins.

Queensland Premier Annastacia Palaszczuk said Brisbane had the equivalent to 80 per cent of its annual rainfall in two to three days, more than it did during the 1974 floods.

Another 30 suburbs in the greater south-east region had one metre of rain in the same period, and there were 1152 people in evacuation centres.

“This event, in most instances, is bigger than ex-tropical cyclone Oswald and ex tropical-cyclone Debbie, it’s bigger than 1974 in terms of the rain event,” Ms Palaszczuk said.

“Honestly, I don’t think anyone was ever expecting that we get this on the top of a two-year pandemic.

She said the Brisbane River would remain at an elevated 3.5-metre level, after it peaked at 3.85 metres on Monday, for the next three to four days amid staged flood mitigation releases from Wivenhoe Dam upstream.

Ms Palaszczuk said the forecast was mostly clear on Tuesday and Wednesday. However, the rain could return on Thursday.

The Bureau of Meteorology is forecasting a possible severe thunderstorm with damaging winds and localised heavy rainfall that might lead to flash flooding in Brisbane on Thursday afternoon.

Meanwhile, Commissioner Katarina Carroll also said she was “disappointed and disgusted” that the homes of people forced to evacuate in the Ipswich area had been looted.

A 22-year-old man was arrested and charged with burglary on Monday. Police Minister Mark Ryan was irate about flood looting, describing it as “outrageous behaviour”.

“Queenslanders support their mates, and if you’re thieving from them. You’re not a Queenslander, you’re a grub,” Mr Ryan said.

Meanwhile, a crane on a floating pontoon that broke loose from its moorings near the Story Bridge on Monday has been stabilised.

The incident triggered evacuations of the Brisbane River bank after authorities were concerned the crane could damage the bridge or smash into the nearby Howard Smith Wharves.