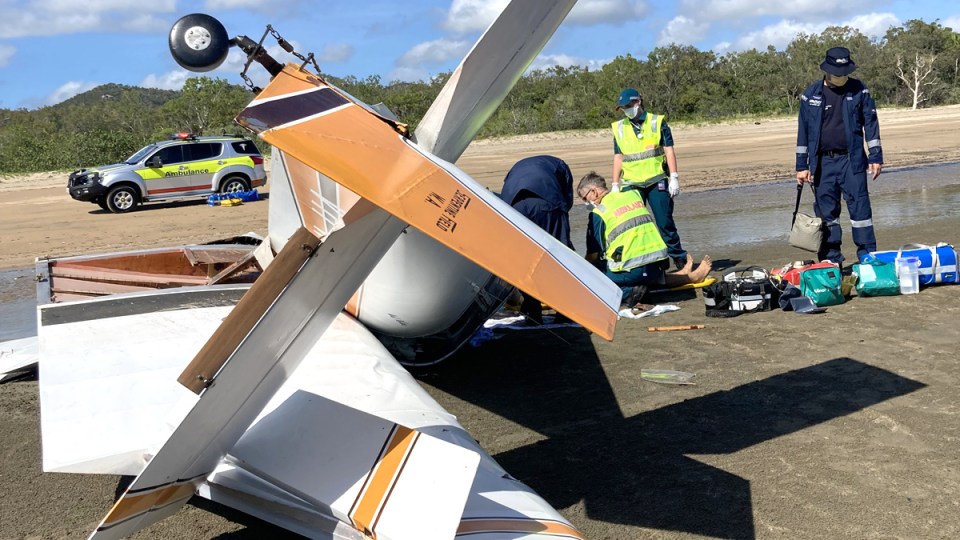 The pilot of the home-built, unmaintained plane had no right to be in the cockpit, authorities say. Photo: AAP

The pilot of a fatal Christmas Eve plane crash in north Queensland was unlicensed and the aircraft had not been properly maintained in almost a decade, a report says.

An 83-year-old man died when the light plane crashed a day before Christmas on a beach at Ball Bay, north of Mackay.

The 65-year-old pilot was airlifted to hospital with minor injuries.

Australian Transport Safety Bureau said on Friday its investigation “established quite quickly that the aircraft … was being operated outside of aviation regulations”.

‘All avenues of inquiry’

The ATSB said it had discontinued its probe because there was a “limited opportunity … to … uncover safety learnings for the broader aviation industry”.

However, Queensland Police said on Friday they were continuing their probe into the crash, examining “all avenues of inquiry” with a report to be prepared for the coroner.

The ATSB investigation found the pilot was operating the plane – an amateur-built Jodel D11 light aircraft – “outside the rules”, with the seatbelts alone required to have been replaced more than 30 years ago.

“The pilot was not licensed to fly aeroplanes and the aircraft and engine had not been maintained in accordance with the appropriate regulations for about 10 years,” ATSB chief commissioner Angus Mitchell said.

“Both the pilot and passenger’s seatbelts were manufactured in May 1973 and were required to be removed from service prior to 1 January 1990 in accordance with a Civil Aviation Safety Authority airworthiness directive.

“When owners operate outside of the rules, they remove the built-in safety defences and undetected problems are more likely to emerge.”