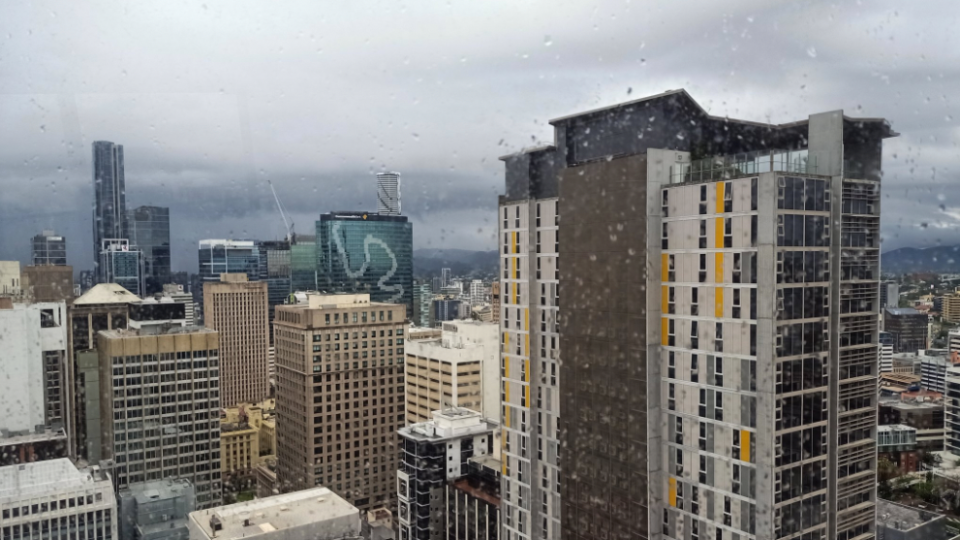 Rain has fallen steadily across Brisbane and south-east Queensland for the past two days. Photo: Twitter

Much of southern and central Queensland is under flood watch as thunderstorms and heavy rain continue to lash the state, with the wet weather forecast to stretch into next week.

Brisbane’s heavy burst of showers late on Tuesday and into Wednesday left many parts of the city awash, with Eagle Farm recording 142 millimetres of rain and Brisbane City 121 millimetres since 9am Tuesday.

The Bureau of Meteorology said it expected widespread minor to moderate flooding around the Darling Downs, Granite Belt and central and southern Queensland.

It said a trough would move slowly eastwards over Wednesday, bringing heavy rainfall over a wide area.

“The heaviest rainfall expected in the Central West, and Central Highlands and Coal Fields, “ a bureau warning stated.

“Very intense rainfall rates are possible for some areas particularly in association with thunderstorms are possible in the watch area, which is likely to cause localised flooding.

“Widespread minor flooding is likely across the flood watch area from as early as Thursday, with isolated moderate flooding possible in association with heavier areas of rainfall.”

The rain is expected to dump another 130 millimetresor so in parts of south-east Queensland over the coming week.

However, the region’s dams are yet to record any improvement in storage, with Seqwater saying there had been a slight drop in water grid storage capacity in the past seven days.

Combined dam levels stood at 55.2 per cent on Wednesday morning, with the main storage at Wivenhoe on 39.6 per cent.

Earlier this week, the bureau confirmed Australia would experience a La Nina weather cycle over the coming summer.

Its head of operational climate services Andrew Watkins said the La Nina was expected to persist in eastern, northern and central parts of Australia until at least the end of January 2022.

He said it would bring more rain to river catchments that were already at capacity.

Much of Queensland on flood watch after record rainfall