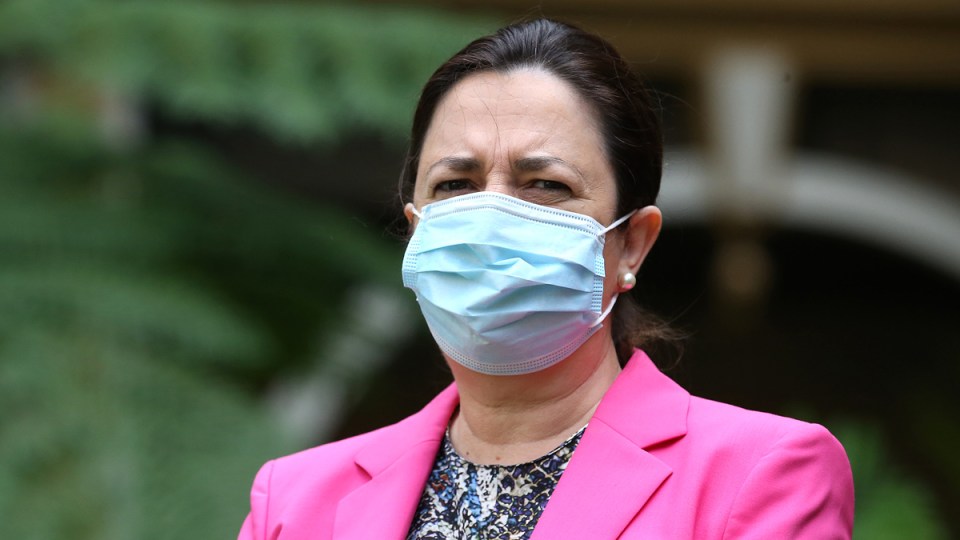 Queensland has immediately returned to mandatory mask-wearing in Brisbane and the neighbouring Moreton Bay region after four new local coronavirus cases in the past 24 hours.

The infections, which break a 50-day streak without local cases in Queensland, include a man from Eatons Hill who works in an aviation training facility.

Queensland Health announced him a mystery case on Monday night.

The man, who is in his 30s, is double-vaccinated but had his second jab only a week ago. His wife has also tested positive, although their child is so far negative.

Premier Annastacia Palaszczuk said there were significant concerns about the third case – a truck driver who was active in the community for a week while infectious, and who was staying in share accommodation.

“The police are speaking to this truck driver to get some more information from him,” she said on Tuesday.

The truck driver stayed at two hotels in Spring Hill and a boarding house in Stevens Road, South Brisbane, while potentially infectious.

The fourth is someone who tested positive after 14 days of hotel quarantine. Queensland authorities are working to determine if it is a historic infection.

Masks will be mandatory indoors and outdoors, if social distancing is not possible, in the two local government areas for at least a fortnight.

She said the next 48 hours were critical for Brisbane – and settings would be reviewed daily.

“At this stage, I do not think a lockdown is warranted. That could change, but I am really, really very comforted by the fact that people do know how to respond and respond very quickly. We have seen that for the last few outbreaks,” she said.

“There’s no need to panic because Queenslanders have been doing the right thing, especially in the south-east,” she said.

“We’ve been here before. I know that south-east Queenslanders will rise to this challenge once again.”

She urged people to follow the mask mandate and also use the state’s check-in app.

The truck driver’s case is causing the most concern for health authorities.

“We’ve had seven truck drivers who have entered Queensland who have been infectious in the community from 24 August,” Ms Palaszczuk said.

The breakout infections come just days before the NRL grand final is due to be played at Suncorp Stadium.

Tickets for the premiership decider between South Sydney and Penrith at the 52,000 capacity stadium in Brisbane have already sold out.

At this stage, the NRL is not overly concerned but has put Townsville on standby to host the final.

Townsville’s stadium has a maximum capacity of 25,000 people.

Just like dogs, we use our noses to select our friends
Aviation worker sparks alert after testing positive to COVID-19 in Queensland
Today's Stories