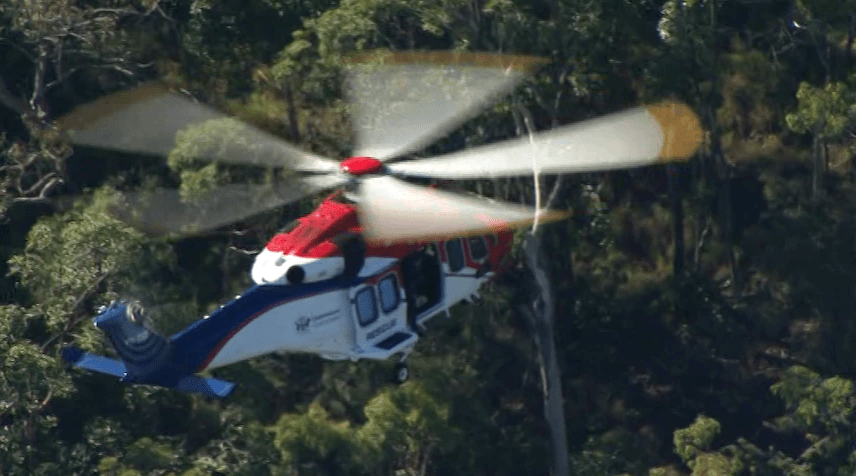 Police were called to Tamborine-Oxenford Road at Wongawallan. Photo: ABC

A high-risk rescue mission is underway in the Gold Coast hinterland after emergency services found a woman clinging to a cliff face after a car crash.

Police were called to Tamborine-Oxenford Road at Wongawallan about 7.20am on Wednesday after reports a car had tried to overtake several other vehicles.

Witnesses told officers the car flipped several times before rolling about 100 metres off the road.

A Queensland police spokeswoman said it was originally reported the driver had fled the scene.

But about two hours later officers heard a woman yelling out from an embankment beside the road.

A rescue helicopter has also been sent to the scene.

Paramedics, fire crews and police officers located the woman in bushland, after searching for her for some time.

The Queensland Ambulance Service said the the woman’s rescue was expected to be lengthy, as the team works through dense bushland.

It is understood the woman has an arm injury but is in a stable condition.

Disease concern for survivors of Afghanistan earthquake
Steve Smith confirmed as starter for first Test against Sri Lanka
Matildas will be keen to forget 7-0 drubbing by Spain
Upcoming stats will reveal where and how hard rates are hitting economy
Victorian MPs pocket a tidy 2.75 per cent pay raise
Reserve Bank review isn’t a ‘get the governor’ exercise: Jim Chalmers
Fog blankets coastal Qld, with showers and storms to come
Today's Stories