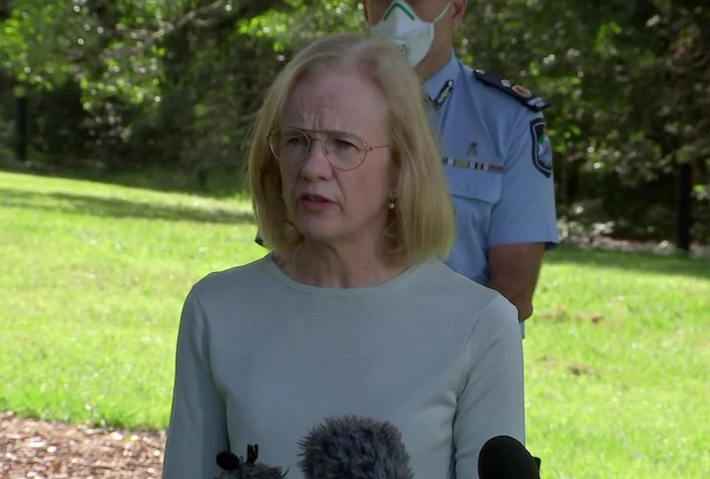 Another nurse at the Princess Alexandra Hospital has been diagnosed as having had COVID-19, with Chief Health Officer Jeannette Young saying the historical case is the “missing link” in one of Brisbane’s recent clusters.

Queensland recorded no new cases of community transmission of COVID-19 in the past 24 hours. However, there were eight new cases — seven in hotel quarantine, as well as the historical case.

Dr Young said the nurse was believed to have treated a returned traveller at the hospital who had also been treated by a doctor, who was also part of the first community transmission cluster.

Dr Young said the returned traveller was “clearly a superspreader, through no fault of his own”.

“The nurse, again through absolutely no fault of her own, has then gone home and transmitted it to her partner.”

The partner lives in north Brisbane and is part of a friendship group linked to the cluster.

“They’ve spread from one to another within that group,” Dr Young said.

“They have been so good in coming forward in sharing that information.”

The nurse never showed symptoms but was tested through being a contact of a case. She is considered to have been infectious from March 10 to March 23.

“She is definitely the missing link,” Dr Young said. “It’s an enormous relief.”

Dr Young said it was likely all cases had been found due to the “astronomical” amount of testing, but she wanted to remain cautious.

“I’m not totally confident [that it’s been contained] until everybody has been vaccinated,” she said. “I declare a cluster over two incubation periods after the first case.”

“If anyone’s been to any of those venues listed, they mightn’t be sick anymore, because they might have had an illness and recovered because it was a long time ago, ” Dr Young said.

“If there’s anyone in their friendship group or their house that are sick, they should go and get tested.”

Police revealed this morning that a person staying at the Princess Alexandra Hospital, who is a close contact of a person with COVID-19, left the facility at about 3:00am on Thursday.

They were located in New Farm by officers in the afternoon and brought back to the hospital. Dr Young said there was no risk to the community.

“Remember, she’s not a case, she’s a contact of a case and she was tested on the 30th of March and she was negative then,” she said.

“I’ve asked them to urgently do another test on her. It’s very low risk.”

Dr Young said the lockdown, which lifted on Thursday, was necessary because there were two ongoing clusters, both linked to the PA hospital.

“So, one, I sort of was a bit OK to take the risk and work it through, and see how we went, but to get a second, that’s too risky,” she said.

“To end up with an outbreak that may lead to a much longer lockdown just isn’t tenable.”

Dr Young said she would not commit to any rules about when she would call a lockdown.

“Thank goodness, we’re not seeing enough things like this to make determinations how we’ll go in the future,” she said.

“Each cluster is an individual cluster. And it’s a matter of looking at what is going on, what is going on out in the community, what is happening in testing … where we’re up to with the vaccination and making a decision then about how to deal with it.”