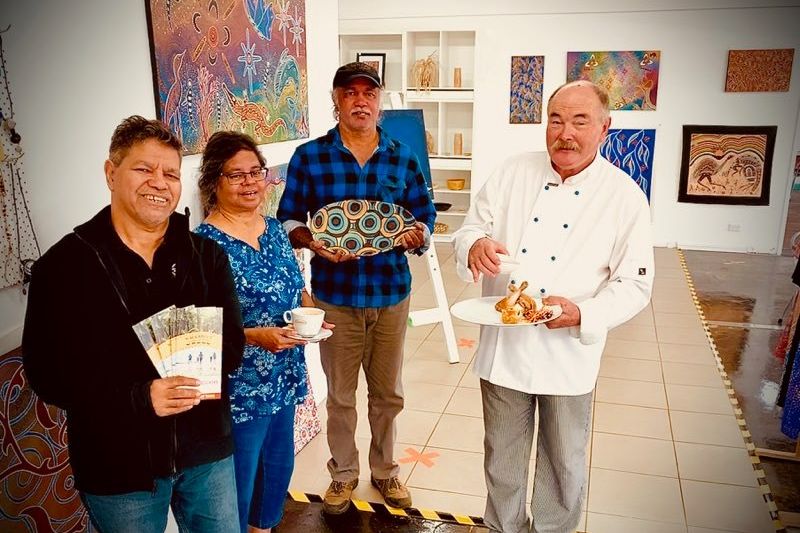 Hendrick Fourmile opened a tourism business with his partner and family in February, only to have to shut down the following month due to the coronavirus pandemic.

“We were thinking we may have made a mistake,” he said.

The venture was the Cairns Indigenous Tourism Hub, a collective of five Aboriginal-owned businesses including an art gallery, Indigenous tour agency and cafe serving bush tucker.

The Queensland government had designated 2020 as the Year of Indigenous Tourism and the timing should have been perfect.

Instead there was no income, and even the markets where Mr Fourmile and his partner Susan Reys (both artists) sold their work were no longer running.

Ms Reys said it was a daunting time.

It seems we’ve totally missed out this year,’’ she said.

“There was one stage there, I think in April or May, I was saying to Henry, ‘Actually I don’t know if we’re going to be open in August’ because things at that time were looking even more grim.

“[Hendrick] was really supportive and he was like, ‘We’ve just got to stay positive. We just keep doing what we’re doing’, and that’s exactly what we did.”

Ms Reys said a significant art commission and their landlord halving the rent helped them survive.

“People were getting spirits entering their houses so I had to do a lot of smoking ceremonies, so I was busy for a while,” he said.

The resumption of the markets and the return of visitors from south-east Queensland was a big help to the business, but its tour desk was yet to resume operations.

Ms Reys said the group was getting its marketing in order and planned to launch two new tours when border restrictions further eased.

Business still at 10 per cent capacity

Long-time tour operator Juan Walker has also managed to stay afloat thanks to government assistance, but said it had been a tough year.

About 80 per cent of Mr Walker’s customers were from overseas and nearly half his domestic visitors were from New South Wales and Victoria.

‘It’s been a bit of a struggle’

“There were times when we were wondering whether it was worth sticking it out or just shutting down,” Mr Walker said.

“Once restrictions started to ease we were quick to get on and write a COVID-safe plan to be able to operate again and we kicked off back in June, but nowhere near capacity so it’s been a bit of a struggle.

We’re running roughly about 10 per cent of what we’d normally be doing at this time of year. It’s really hard.’’

The Queensland government also extended the Year of Indigenous Tourism to 2021, which Mr Walker welcomed.

“It’s great they’ve extended it – not just for myself, but other Aboriginal-owned tour businesses in the region will get another opportunity to really push and showcase traditional culture,” he said.

“Hopefully borders will open, international travel will start again and we can jump straight on where we left off at the beginning of the year.”

Queensland Year of Indigenous Tourism foiled by COVID-19, but businesses determined to survive