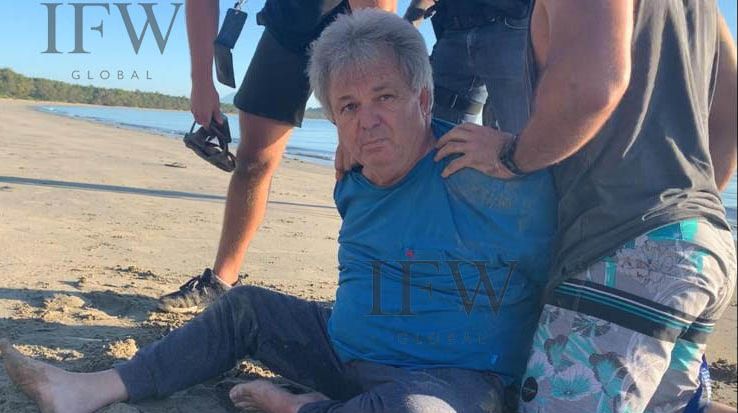 Notorious conman Peter Foster has been arrested on a beach in Far North Queensland and is expected to face fresh fraud charges over an alleged international sports betting scam.

Private investigation agency IFW Global tracked Mr Foster to Port Douglas, where the 57-year-old was nabbed about 8am on Thursday.

The infamous businessman was walking his dogs on Four Mile Beach when plain clothes police officers swooped and handcuffed him on the sand.

A spokesperson for New South Wales police said Peter Clarence Foster — who has been the subject of a fraud investigation by Strike Force Apron Two — was taken into custody by Queensland Police about 9am.

The spokesperson said investigators would apply for Mr Foster to be extradited to New South Wales.

Mackay-born Mr Foster has a long criminal history, having served time in prisons in several countries for a range of offences from fraud and money laundering to contempt of court and resisting arrest.

International investigation firm IFW Global issued a media release after the arrest stating chairman Ken Gamble had been assisting New South Wales Police with an investigation into a complaint alleging an Asia-based company called Sport Predictions was a bogus front for Mr Foster to scam money.

Mr Gamble had located Mr Foster in Port Douglas and kept him “under covert surveillance” for a month, the statement said.

The private investigator and convicted fraudster have a long history.

In 2014, Mr Gamble was hired by an Australian media outlet to track down Mr Foster, who had been on the run for almost a year after failing to appear for a sentencing hearing in the Federal Court of Australia.

Mr Foster, looking unkempt with long hair and a beard, was arrested in Byron Bay in October that year after IFW tracked him down. He was extradited to Queensland and jailed for 18 months on an outstanding warrant.

In 2015, just months after Mr Foster was released from prison, the home of his mother on the Gold Coast and a property in Byron Bay were raided by Australian police following allegations that Mr Foster had arranged to hire a hitman to kill Mr Gamble. Mr Foster denied the allegations and has never been charged.

At the same time, Mr Gamble was working for about 150 investors in a multi-million dollar scam called Sports Trading Club (STC). In 2018, Mr Foster pleaded guilty in Sydney to using a false name to lure investors into STC.

The latest twist in Mr Foster’s tale comes after Mr Gamble claims he was alerted to fresh accusations of a betting scam by a “businessman in Asia”.

“The businessman felt he’d been the victim of an elaborate scam and asked me to investigate in an effort to recover his investment,” Mr Gamble said in a statement on Thursday.

He alleges Mr Foster was acting under a false name as the operator of a sports trading company named Sport Predictions.

Until recently, Mr Foster had been living on the Gold Coast where his mother, well known real estate agent Louise Foster-Poletti, resided for many years. She died in May.

The notorious conman first courted controversy in the late 1980s when he was fined in the United Kingdom for falsely promoting weight loss tea with model Samantha Fox. He then moved to the United States where he served four months in a Los Angeles prison for fraudulently claiming the tea lowered cholesterol.

His colourful career has included controversies involving the wife of then British prime minister, Tony Blair, and in 2018 he was linked to convicted wife killer John Chardon after he claimed Chardon confessed to the crime to him while they shared a cell in a Brisbane prison.