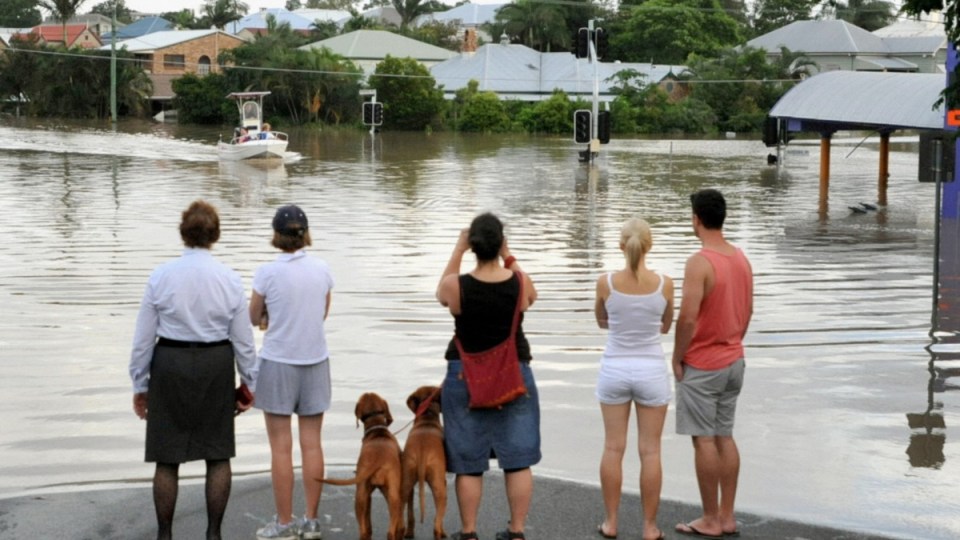 Residents in a flooded Brisbane street in 2011. Photo: AAP

Emotional flood victims have expressed enormous relief after a NSW court found in favour of almost 7000 Queenslanders whose homes and businesses were flooded in 2011.

Among the 6800 to celebrate together on Friday, former Ipswich mayor Paul Tully and local resident Frank Beaumont, 77, are expected to get compensation in the new year after a successful class action against the Queensland state government and the operators of Wivenhoe and Somerset dams.

“The mental stress has been horrendous,” Mr Beaumont said.

Shirtless and wearing the same old pants he had on when his Goodna home went under, Mr Beaumont admits to being surprised by his own tears on learning he’d won.

“It sort of got to me. We’ve had so many trodden down moments where the insurance didn’t pay, being kicked out of a rental home and then having to rebuild an absolutely devastated house.”

Mr Tully, who lost his Goodna home in the devastating floods, watched a live stream from Queensland of the summary judgment by NSW Supreme Court Justice Robert Beech-Jones alongside fellow plaintiffs who joined the class action.

“That sounds like we won,” Mr Tully told reporters after the judgment was handed down on Friday morning.

“A lot of families have split, a lot of people have moved on, some people never came back to the area,” he told Nine News.
“It’s just been a very long, torturous process. We had insurance but it didn’t cover everything, as a lot of people found, and that’s why we’re part of the class action.”

Champagne flows in the shadow of the Goodna flood marker, as some of the 6000 plaintiffs in QLD Floods Class Action celebrate today’s determination. @10NewsFirst @10NewsFirstQLD pic.twitter.com/3YqswW2eKv

Justice Beech-Jones accepted engineers tasked with managing Wivenhoe and Somerset dams in the lead up to and during the devastating deluge in January 2011 failed in their duty of care.

He said they did not follow the dam operating manual that they themselves had helped write. No cost decision has been made with the case to return to court in February.

Justice Beech-Jones agreed with victims’ claims that engineers negligently managed the dams and that they did not factor in extraordinary rainfall forecasts in deciding how best to respond to the flood event.

That was despite them being obliged, under the dam manual, to do so.

SupCt finds dam operators were negligent in the way they conducted flood operations during the Queensland floods of January 2011, ruling in favour of the plaintiff in a large class action. Sum: https://t.co/HLPNePhlt2

About 23,000 homes and businesses went under in Brisbane and Ipswich when authorities released huge amounts of water to protect the dams’ structural integrity.

He found that during days of heavy rain, before the peak of the flood on January 11, dam engineers prioritised keeping downstream bridges open over trying to limit flooding in urban areas.

He said the engineers had “failed to follow the very manual they drafted 18 months earlier”.

No cost decision has been made with the case to return to court in February.

The ruling has been years in the making and was heard in NSW because at the time it was lodged, class actions were not possible in Queensland.

In 2017, the NSW Supreme Court heard the lead clients, Vince and Maria Rodriguez, lost about $100,000 worth of stock from their Fairfield Gardens store, which ultimately had to shut down because the shopping centre in which they leased was closed for months after the January 2011 deluge.

Law firm Maurice Blackburn launched the case against Seqwater, Sunwater and the state of Queensland, claiming Wivenhoe and other dams were operated negligently.

Nicholas Owens SC for the plaintiffs told the trial at the time Seqwater had accused Mr and Mrs Rodriguez – and other victims – of “contributory negligence” and not doing enough to protect their properties.

Mr Owens said it was “a contention we struggle to understand”, adding the clients had made “the most strenuous efforts” to protect their property.

Mr and Mrs Rodriguez weren’t able to get back into their shop until about a week after the flood peak, and by that time $100,000 in stock was ruined.

The business permanently closed in June 2015, having never fully recovered from the financial impact.

Insurance Council of Australia Spokesman Campbell Fuller said they would review the court decision for its commercial implications.

“Insurers paid more than $1.5 billion (in today’s dollars) in claims following the 2011 Brisbane floods,” he said.