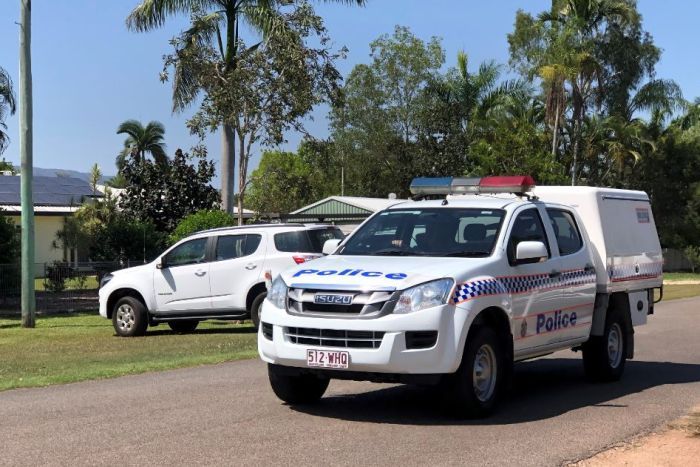 Police set up a crime scene outside the Townsville property after Wednesday's shooting. Photo: ABC

A woman has been shot in the head and two men have been injured in what police believe is a business debt dispute in north Queensland.

Police were called to Gibraltar Road in Rangewood, at Townsville, just after 8am on Wednesday after reports of a gunshot.

Queensland Ambulance Service senior operations supervisor Tony Kirkham said a woman, 40, was found inside the house and taken to hospital in a serious condition.

It is understood she was allegedly shot in the head by a 48-year-old man, who is now in police custody.

“It appears that a male, who was known to both occupants of this house, has attended the residence with regards to an outstanding civil debt after a failed business,” Senior Sergeant Joe Matheson said.

Police said she was shot in the side of her face and then tried to hide from the man under her car.

“They were both in the garage wrestling when the husband has come out,” Senior Sergeant Matheson said.

“He has attempted to protect his wife. He’s kicked out the offender.

“He’s then called on assistance and a male tradesperson working in the area has attended and has been struck in the back of the head with a claw hammer.

The woman’s husband, 53, received a cut to his foot while the tradesman, 53, suffered blunt trauma to his head.

The woman was rushed to Townsville Hospital, with QAS describing her condition as “quite seriously ill”.

“Two other male patients were less seriously injured and a male patient was left in the custody of Queensland Police and I believe they’ve actually transported him to another location,” Mr Kirkham said.

“It obviously had been a chaotic scene and quite distressing but by the time we arrived it was well under control.

“Some neighbours had actually assisted, offering some assistance to those people and some first aid and that was very much appreciated.”

Police confirmed the alleged shooter was in custody and a crime scene had been established.

“At this stage he is probably looking at attempted murder, enter with intent, and several other firearm offences,” Senior Sergeant Matheson said.

“The offender is claiming that the other people owed him money.

“[The woman] was actually opening the garage and attempting to go to work when she was shot and confronted by the offender.”

Police said they recovered both a long arm and a concealed firearm from the scene.

Three injured, including one seriously, in Townsville shooting