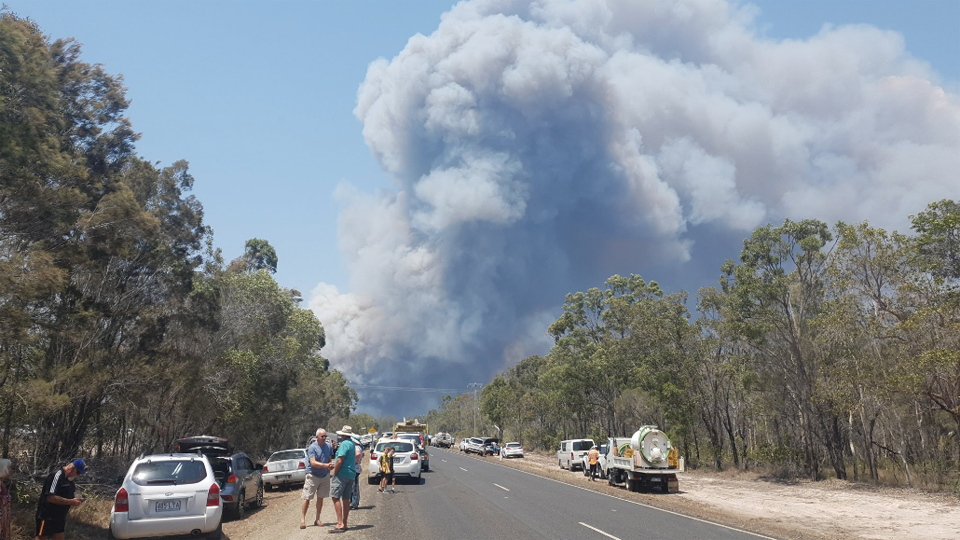 Residents at Walkers Point, near Bundaberg, were urged to evacuate as a large fire approached. Photo: Twitter

A water-bombing helicopter has crashed while fighting bushfires at Pechey, near Toowoomba. The pilot has been taken to hospital with minor injuries.

Mayor of the Toowoomba Council Paul Antonio had the news broken to him on the air while speaking to the ABC.

“I wasn’t aware of all of that but I would say we are very thankful to those people who go out there, those skilled pilots who go out there and help us control fires when needs be,” he told the ABC.

“Our thoughts are with all concerned and we are looking forward to it working out the right way.”

#Update – one patient has been transported to Toowoomba Hospital in a stable condition after a heavy helicopter landing in #Pechey at 1.52pm.

“Parts of this fire are in inaccessible country,” he said.

“It is very, very important that those resources were thrown at it quickly to get the fire under control.”

A Queensland Ambulance Spokesman said the Pechey incident was a heavy landing and the pilot, the only person on board, is currently being treated for minor injuries. https://t.co/oqNXeGJHqa

The east coast’s ongoing unprecedented bushfire crisis hit hard in Queensland on Wednesday, with the number of emergency warnings escalating sharply throughout the afternoon.

Another one followed – for the blaze at Pechey – later in the day. All were among more than 70 fires burning across the state on Wednesday afternoon.

“We’ve got another tough day today and there is an extended forecast that we are not out the woods by any means,” Acting Queensland Fire and Emergency Services Commission Michael Wassing said.

North Shore residents were told to leave by ferry shortly before midday (local time) as a dangerous bushfire approached their isolated community on the northern banks of the Noosa River.

There are no roads out of the community.

The fire is burning in the vicinity of Beach Road and the First Cutting, and might impact the Wallaby Track area soon.

Resident and rural fire brigade member Dave Wright was staying put in the short-term, but had his own boats ready if he had to escape.

“The dinghies are in the water and primed to go,” he said.

“It’s how we travel every day. We don’t be reckless,” he told The Sunshine Coast Daily.

“They are throwing everything at it.”

By midday, water-bombing aircraft were trying to extinguish the Noosa North Shore fire. Ground crews were also fighting the blaze.

“But firefighters may not be able to protect every property. You should not expect a firefighter at your door. Power, water, and mobile phone service may be lost,” the fire service said.

“It’s the third fire that has started up on North Shore, so I’m told, this morning, which might lead one to assume that it wasn’t an act of nature, shall we say,” he told the ABC.

He said no houses or buildings were threatened by the fire.

“Of course we have very variable winds over there, particularly being right on the coast,” he said.

“We are being as cautious as possible and that’s why it’s important that residents of North Shore move out of the area.”

As the east coast bushfire emergency moved north to Queensland on Wednesday, Queensland Fire and Emergency Services expected containment lines to be tested throughout the state.

A severe fire danger warning is in place for the drought-stricken Darling Downs and Granite Belt, the Wide Bay and Burnett region, and the south-east coast, taking in Brisbane and the Gold and Sunshine Coasts.

However, fire authorities were comfortable with the resources Queensland had to deal with the day that lay ahead, including 40 aircraft, and crews from New Zealand, Tasmania and the Northern Territory.

There are also concerns about a bushfire at Cobraball, near Yeppoon, in central Queensland, which has destroyed 13 homes.

Livingstone Shire Council Mayor Bill Ludwig said the blaze had behaved like none anyone in the region had seen before.

“Nobody has seen a fire that has reacted like this – we’ve had bad fires before, but nothing that’s moved this quickly, this dramatically,” he told ABC news on Wednesday.

Cr Ludwig said containment lines were holding, but the erratic fire was being fanned by increasing wind gusts and high temperatures.

Early on Wednesday, the five-star Spicers Peak Lodge on the Southern Downs was evacuated. Resort managers had turned away bookings earlier in the week and only a couple of staff remained on site as a fire approached the lodge.

By the afternoon, however, that blaze was burning within containment lines and was not directly impacting properties.

Residents at Walkers Point, south of Bundaberg, are being told to evacuate to Woodgate with firefighters battling a large bushfire @abcnews pic.twitter.com/pffLy1elsV

Overnight on Tuesday, thousands of firefighters battled a record fire front that had devoured more than a million hectares of land in NSW, blanketed Sydney in smoke and came dangerously close to the urban fringes.

Conditions were expected to ease in NSW on Wednesday, but RFS Commissioner Shane Fitzsimmons said a weekend forecast for severe weather and another burst of hot air next week meant “we simply aren’t going to get the upper hand on all of these fires”.

Conditions for Queensland were also expected to ease on Thursday, although temperatures will heat up again further into the weekend.