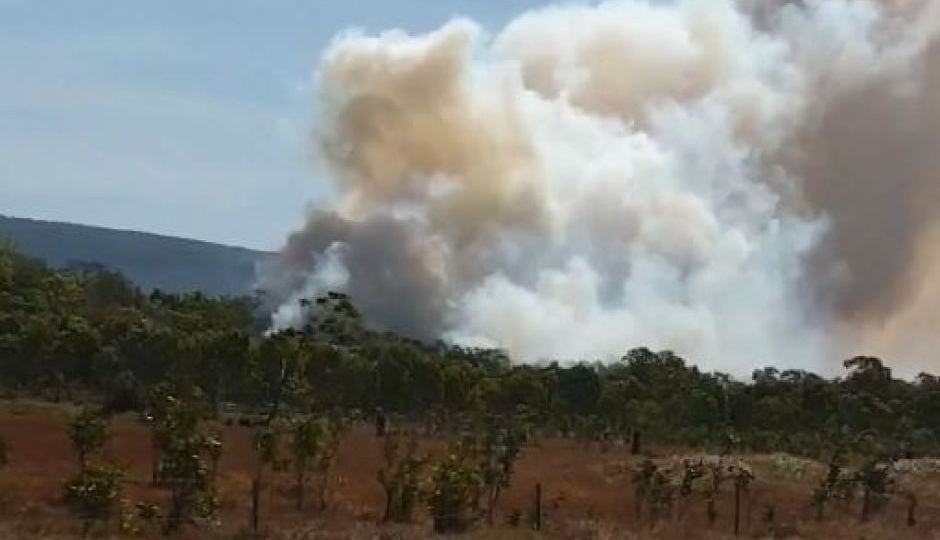 The bushfire in Cooktown has burned one house to the ground.

A property has burned down and several more are under threat as a large, fast-moving bushfire burns through a rural area about 12 kilometres west of Cooktown in Cape York.

The fire was travelling in an easterly direction from Wilton Access Road towards Endeavour Valley Road Cooktown about 4pm local time on Sunday.

A watch and act notice remains in place.

Houses along Wilton Access Road and Poison Creek Road are being evacuated, according to Queensland Fire and Emergency Services, and residents are urged to get ready to leave the area as the situation may worsen.

Cook Shire Mayor Pete Scott said he had been told the fire may have been initiated at the property that burnt down.

“There was a building that basically burnt down out there – it was a residence,” Mr Scott said.

“It was burnt down along with some other sheds and old cars as well.”

The Queensland Ambulance Service said a male in his 40s required treatment for minor injuries, but it is believed no one else was injured in the fire.

The fire is continuing to burn through a sparsely inhabited rural area surrounding the property.

Rural fire crews were attempting to bring it under control before the fire intensified with dry conditions and strong winds in the mid-afternoon.

“We thought we had it contained, but because of the strong wind it’s sort of spotting well ahead of itself at the moment too,” Mr Scott said.

“Our guys can only do so much for so long and then they need support after that, and somebody to take over.”

More QFES resources are currently making their way to the remote, coastal area.

SES crews are providing logistical support at an incident command centre, but an evacuation centre has not yet been established.

The community has been urged to support anybody who has been displaced by the fire.

“Standard operating procedure around here when things go a little bit awry is people put their hand up and friends, family and neighbours help out,” Mr Scott said.

“Everybody’s home is their home and their treasure, so it’s very, very sad that somebody’s lost their place, and we hope and pray that the others stay okay.”

Mr Scott said it is unlikely the fire would make its way all the way to the township.

Crews are expected to work into the night as they battle to bring the blaze under control.

Cooktown bushfire burns down one house, unlikely to reach township