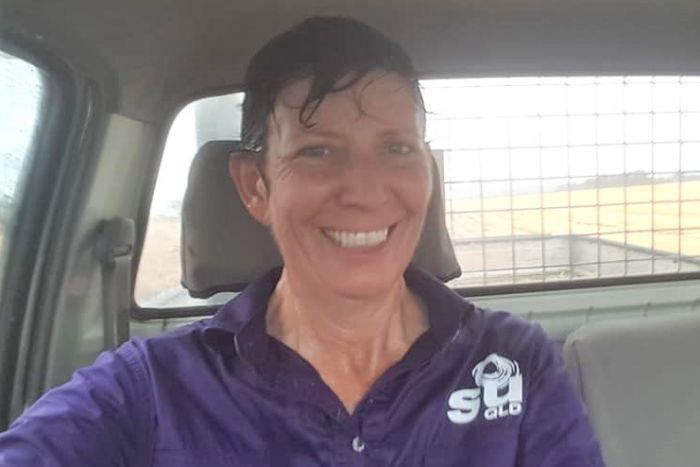 Trina Patterson from Rolleston in central Queensland says she was playing in the rain like a "big, happy kid". Photo: ABC/Supplied

Residents in central-west Queensland are rejoicing after storms brought patchy downpours to their drought-stricken properties overnight on Tuesday.

The highest total was recorded at a station east of Blackall, which received 50 millimetres of rain.

Jess Gardner from the Bureau of Meteorology said there were also decent falls at Fairview, Quilpie and Blackall, which had not recorded any rain for months.

“There was widespread falls of a few millimetres and then underneath the storms we’re seeing some of those larger totals as well, which is great for those people who really need them,” she said.

“For a lot of the region it has been many, many months since they have seen anything decent.”

Longreach grazier Jenny Gordon said she was “chuffed” by the start of the wet season.

“It’s not everywhere but just in patches you’ll just see green shoots, so this 18 millimetres is just going to be a bonus for us,” she said.

“We’re not in November yet, so fingers crossed this is the start of what’s going to be a more positive season.”

Chrissie Bunter at Ilfracrombe said her property measured five millimetres of rain – the first fall since three millimetres on March 29.

Ms Gardner said a stationary upper low would bring more rainfall to the region over Wednesday and Thursday.

“There is a chance of seeing some severe storms as well – we could even see some stronger winds and hail as well this afternoon,” she said.

“Hopefully this is a sign of things to come for the next few months, but it is definitely a very welcome change to the long spell of dry weather that we’ve had.”