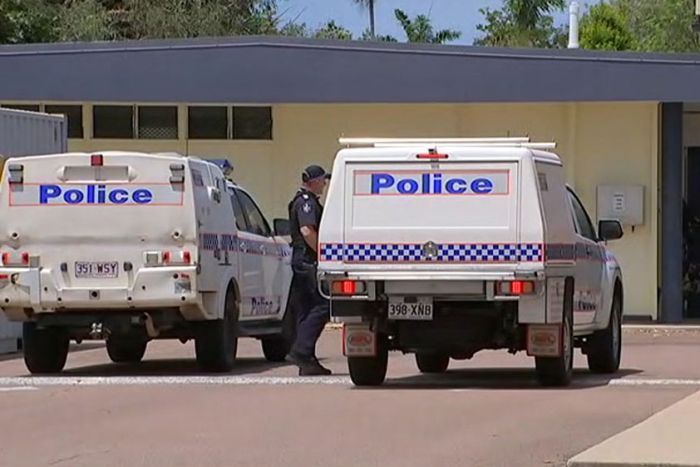 The school was put into lockdown after Monday's incident. Photo: ABC

The father of an 11-year-old Townsville girl who was tasered by police, after allegedly stabbing a teacher has apologised, saying he has “no idea” what was going through his daughter’s mind.

Officers and paramedics were called to Heatley State School about 11.30am on Monday after a 56-year-old female teacher was allegedly stabbed in the back of the shoulder with what officers believe was a small paring knife.

The teacher and the student were both taken to hospital.

On Monday night the girl was charged with wounding, possession of a knife in a public place and threatening violence.

She will appear in the children’s court at a later date.

On Tuesday morning, the girl’s father said he was sorry for what happened and pleaded for people not to label his daughter as violent, explaining she needed support for depression.

“I’m really sorry for what happened yesterday … I don’t teach my kids to go out to school and assault a teacher,” he said.

The man said he doesn’t know what his daughter was thinking.

“[I] have no idea. I mean, [it’s] like mental depression. Who knows what a person is thinking, what state of mind they are [in].

“It is well out of character. I have spoken to the teacher on numerous occasions. I didn’t think there was a problem, you know, she’s a nice lady, she’s a nice teacher and once again I apologise for what my daughter has done.

“I hope for a speedy recovery,” he said.

He said his daughter isn’t normally violent and doesn’t break the law or skip school.

He also criticised people for branding her violent on Facebook.

The man said he had exhausted all options of seeking counselling services for him and his daughter.

He also explained that his daughter needed support for depression but the school only had part-time counsellors.

“They do have guidance officers but they only work a couple of days a week.

“There’s been a downfall in support.”

He said the Education Department needed to fund more counselling services for children.

“This is a very isolated, concerning, incident and clearly we want to look at all the circumstances about how this escalated and also how this student at 11 or 12 years old was able to have a paring knife at school,” she said.

The teacher has been released from hospital and counselling has been offered to both the teachers and students at the school.

On Facebook, parents praised the school’s handling of the situation.

Police said parents had no reason to be concerned about the ongoing welfare or safety of their children.