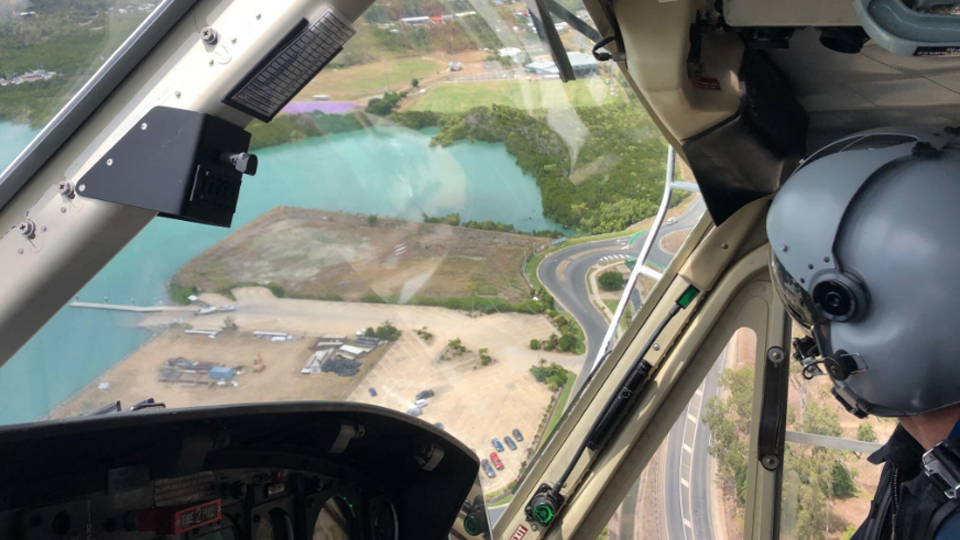 The rescue helicopter arrives at Mackay Base Hospital with the two injured men on board. Photo: Twitter/RACQ CQ Rescue

A shark has bitten off a man’s foot in a terrifying attack on two young English tourists near Airlie Beach in Queensland’s tourism haven of the Whitsunday Islands.

The men were snorkelling with a ZigZag Whitsundays boat when they were attacked in Hook Passage about 10.20am on Tuesday.

Queensland Ambulance Service’s Tracey Eastwick said the shark first attacked one of the pair, then returned and bit the second man.

One of the men, 28, lost his right foot, the second man, 22, suffered severe calf lacerations.

Two British tourists bitten by a shark in the Whitsundays today have told #RACQ #CQRescue crewmen they were wrestling and thrashing about in the water in Hook Passage when the attack occurred.

An English tourist has had his foot bitten off and another has serious lacerations to his lower leg after a shark attack in the Whitsundays today. Both were transported to Mackay Base Hospital by #RACQ #CQRescue in a serious but stable condition.

There were 20 people on board the tour boat but it remains unclear how many were in the water at the time, or what type of shark attacked.

The boat crew made an emergency call and headed for Coral Sea Marina while two international paramedics gave first aid.

They were then transported to Mackay Base Hospital by the RACQ rescue helicopter in a serious but stable condition.

“We are saddened to confirm that two of our guests were injured in a shark attack this morning. Our thoughts are with them, their families and the other guests on the tour,” it said in a statement.

The Whitsundays region has been the site of several shark attacks in the last year.

Victorian man Daniel Christidis, 33, died last November after being attacked at Cid Harbour at Whitsunday Island during a trip with friends and colleagues.

Earlier this year a man was bitten on the thigh in waters at Hardy Reef, about 50 kilometres north-east of Hamilton Island.

Whitsunday MP Jason Costigan said governments at all levels were failing to protect locals and tourists.

“We are going to have more and more of this happening until governments put public safety as their No.1 priority,” he said.

Mr Costigan said the entire area should be protected by a beefed up shark control program.

“I will not shy away from my stance that the drum lines need to go back in,” she said on Tuesday.

But a spokesman for Queensland Fisheries Minister Mark Furner said the area was not part of the controversial shark controlled program that was suspended earlier this year.

“Airlie Beach has never been covered by the shark control program,” he said.