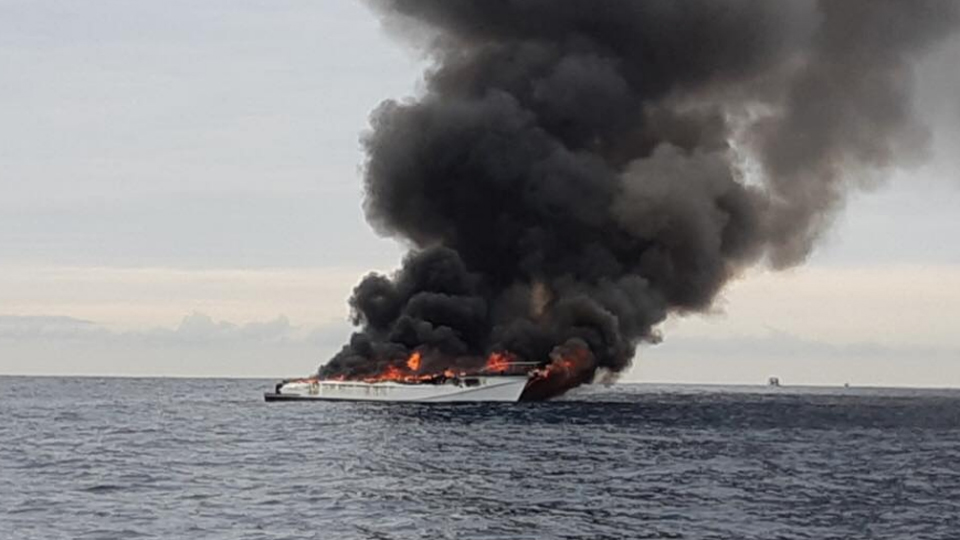 The boat was fully ablaze, and then quickly sank. Photo: Twitter/Queensland Ambulance

Eight people whale watching off the Gold Coast on a private boat have been rescued after the vessel caught alight and sank on Wednesday morning.

The boat was fully engulfed by flames about seven kilometres off Main Beach when emergency services were called just before 9.30am.

Those on board reportedly managed to climb aboard a life raft before being taken back to shore by water police.

Beverley Weldon from the Gold Coast Seaway Tower said other boats out at sea first raised the alarm just after 9am.

“One of the charter boats that was out at sea fishing advised us that there was some smoke further out at sea and they were going to investigate,” she told the ABC.

“At 9.10am … we had another radio call from another vessel saying there is a boat on fire out on the 50-metre line east of the seaway and there are eight people in a lifeboat and gave us the co-ordinates.”

Images of the vessel on fire in waters off #MainBeach. pic.twitter.com/HitTYpuxVw

She said the police boat left about 10 minutes later from the seaway.

“By that stage there was a big cloud of black smoke out at sea,” she said.

The boat was owned by Gold Coast locals who were taking friends visiting from overseas out to view whales.

The eight people on board were aged between 13 and 78. No injuries were reported.

Police said an electrical fault in the engine room of the 18-metre vessel sparked the blaze, causing the billows of black smoke that could be seen from the shore.

“The skipper has heard a bang and gone down in the engine room to inspect the cause,” Senior Sergeant Jay Notaro said.

“He opened up the switchboard and at that time, it immediately combusted and fire has broken out.

“He has got everyone together, onto the tender, and from there has made a distress call and emergency services responded.”