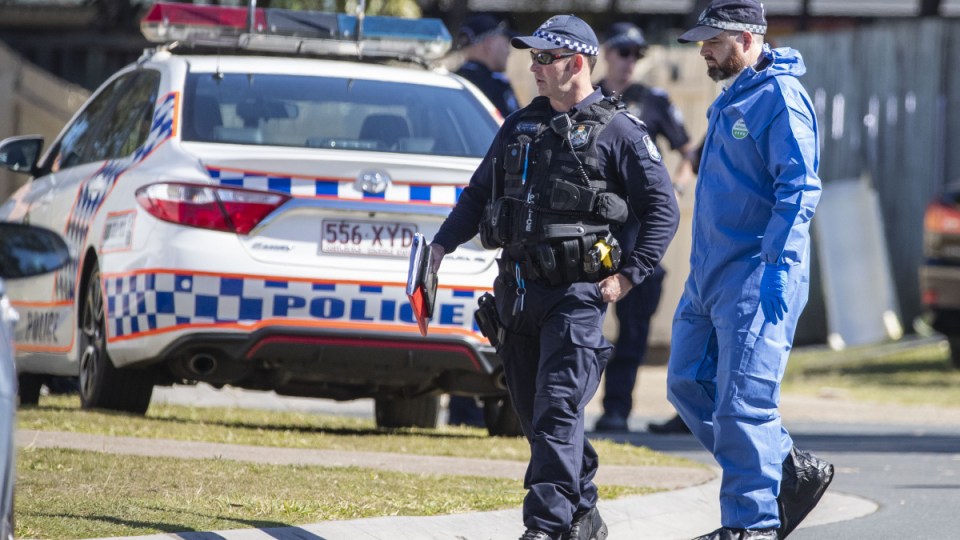 Police at the scene of Monday's fatal shooting south-west of Brisbane. Photo: AAP

Women and children fled a house moments before an male occupant armed with a samurai sword charged police and was shot dead during a siege south-west of Brisbane.

The 41-year-old man, believed to be the children’s father, was shot about 7.45am on Monday outside the house at Cassowary Street at Doolandella.

Deeply distressed relatives of the dead man were turned away from the crime scene after talking to police.

A cousin of the man was clearly in shock as he spoke to police before declining to speak to media.

Nearby neighbours were less tolerant, shouting abuse at media in the area.

Inspector Tim Partrige said the armed man had barricaded himself in the home with four children, all aged under 10, and two women when police were called to attend a “disturbance” about 5.20am.

After a tense two-hour standoff, police successfully negotiated the release of the women and children, who ran from the home and were assessed by paramedics.

“He was fatally shot outside the front of the premises.”

Large police presence in Doolandella after police shot dead a man earlier this morning. Man was armed with a sword and at one point there were children inside the home @TheTodayShow @9NewsQueensland pic.twitter.com/NC2NI5KTQe

The officer who fired the fatal shots is stressed but comfortable and had no option but to open fire, he said.

“It’s traumatic for everybody involved. It is never the intention of police to resolve in this manner but, unfortunately, circumstances dictate you have no other option,” he said.

Amit Chand visited the street on Monday morning in the middle of the police investigation after receiving a text from his brother.

His parents live close to the scene of the shooting and he was shocked by the incident.

“They only recently moved in, I think they were an Asian couple,” Mr Chand said.

He said he often saw the four children playing outside the home.

“This is the first time I’ve seen it anything like this in this street, it’s a bit of a shock”

Police have blocked off the quiet cul-de-sac.

The Ethical Standards Command is investigating the appropriateness of the police response with oversight by the Crime and Corruption Commission.