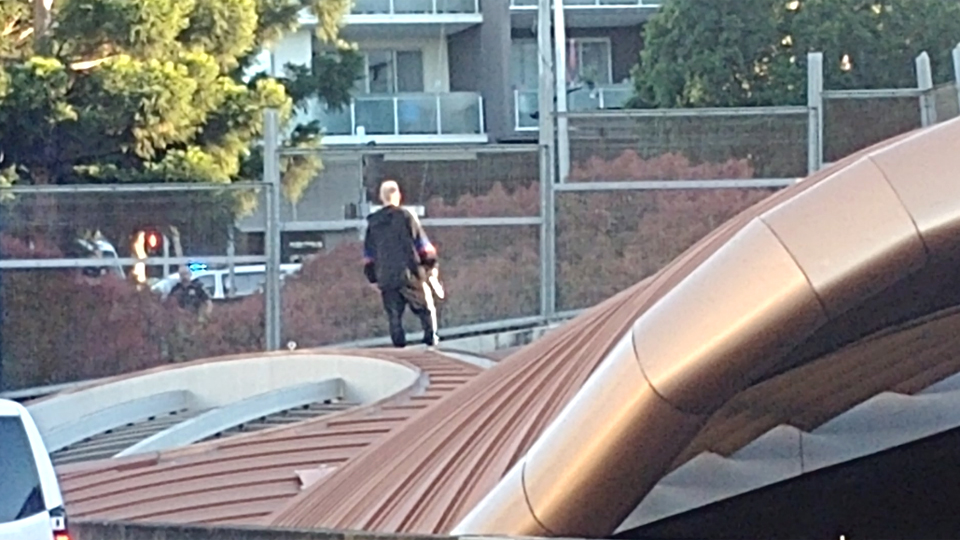 The man on the roof of the tunnel entrance on Thursday. Photo: Twitter

One of Brisbane’s busiest tunnels has reopened after a man was taken into custody following a seven-hour stand-off with police.

Officers were called to the entrance of the Clem Jones Tunnel at Shafston Avenue, in Brisbane East, just before 7am on Thursday after a man climbed onto a structure at the northbound entrance.

The entrance and exit to the tunnel at Shafston Avenue remained closed throughout most of the day, as negotiators talked to the man.

Channel Ten reported shortly before 2pm that the man had been removed.

However, the incident had already caused major traffic delays, including on feeder routes into the city. The Australian Traffic Network tweeted earlier on Thursday afternoon that the tunnel entry was expected to remain closed through the afternoon peak.

Motorist Julie Pesch was driving into the city on Thursday morning when she came within half a metre of the man as he leaned over a barrier with the knife in his hand.

“He leaned over the side of the road as I passed by, and he had this huge knife dangling from his hand,” she said.

A man brandishing a knife at one of Brisbane's busiest tunnels has disrupted peak-hour traffic as police negotiators try to talk him down.

Officers were called to the entrance of the Clem Jones Tunnel just before 7.00am: https://t.co/bhrnyKlAhi #9News pic.twitter.com/D1GeaUgmpq

She said she was worried for the safety of road workers in the area, as well as people waiting at a bus stop.

“He looked like he was contemplating doing something bad and was looking across the street to where the bus stop was,” she said.

Ms Pesch said she was about to call make an emergency call when she saw a police vehicle perform a dramatic U-turn, across four lanes of traffic on the nearby Story Bridge, and head back to where the man had been.

Armed man shuts down Brisbane tunnel for the day