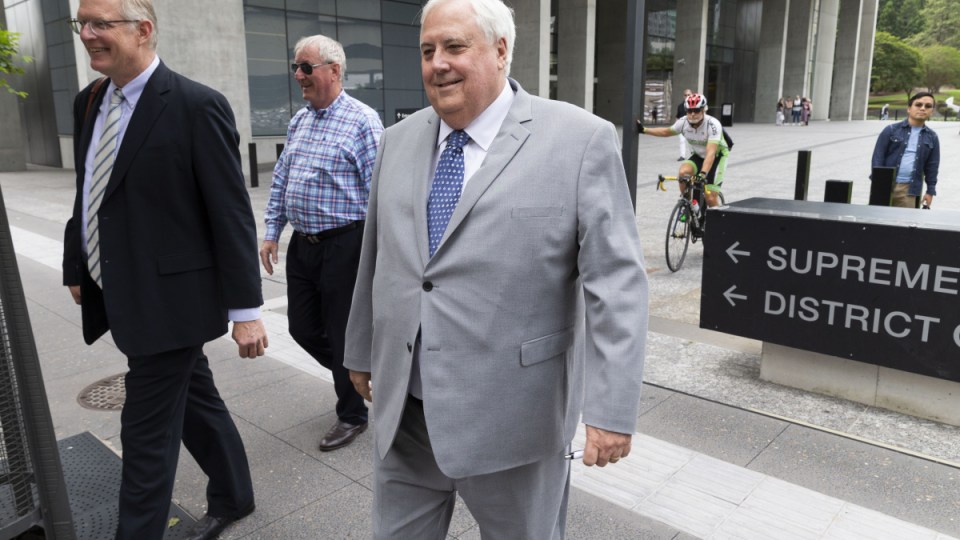 Mr Palmer outside the Supreme Court in April. Photo: AAP

As Queensland Nickel headed towards collapse, Clive Palmer signed a $135 million deal to pay himself ahead of workers and suppliers, a court has been told.

More light has been shed on the company’s chaotic last days during the second day of a trial in the Brisbane Supreme Court trial on Wednesday.

The billionaire businessman is fighting a massive federal government lawsuit against him and his nephew Clive Mensink over the Townsville refinery’s collapse in 2016, as QN liquidators try to claw back about $200 million owed to creditors.

On Wednesday, lawyer for the liquidators Graham Gibson said Mr Palmer was a busy man in the days before administrators were called in to take over.

“Interesting things happened with the company China First, which was wholly owned by Mr Palmer,” he said during his opening address.

Mr Palmer’s wife, Anna, was appointed a director of the company and Queensland Nickel agreed to buy $135 million worth of shares in the company, he said.

Mr Gibson said QN had no money or assets to pay for the shares but the agreement signed had a clause, which prioritised China First’s payment ahead of employees and suppliers if the refinery went into administration.

“Prior to the transaction … the paid-up capital of this company was $2,” he said.

“The shares were of no commercial benefit to QN and the China First coal project was worthless, he said.

“There is only one purpose that is evident from this transaction … that purpose was to prefer the interests of the Palmer parties, Mr Palmer ultimately … over the interest of all other unsecured creditors,” he said.

“Extraordinary is, in fact, an understatement.”

Mr Palmer, who is representing himself, failed to turn up to court on Wednesday.

Justice Debra Mullins noted the absence for the record, but ordered the trial continue without him.

Earlier, the court heard QN was trading insolvently months before administrators were called.

They ultimately decided the business was too broke to continue and shut it down in April 2016.