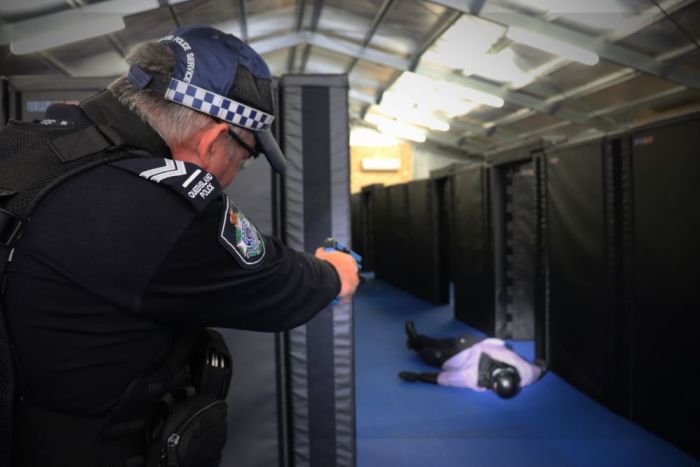 There have been changes to police training, as officers feel increasingly under threat. Photo: ABC

The frontline is becoming more dangerous for police, with figures showing officers increasingly having to draw and fire their guns on the job, a senior Queensland policeman says.

Queensland Police Service data shows officers fired their weapons twice as much in the first four months of 2019 compared with the same period in the past two years.

“Police are being presented with a greater level of threat and are being called to more things that justify pulling their firearm out and pointing it at a person,” he said.

Officers have drawn their firearms 410 times from January to April this year — a 70 per cent increase on the same period last year.

“Commonalities include people in crisis with mental health issues, with alcohol and drugs on board, and people with edge weapons and knives,” Inspector Allen said.

A recent shooting incident on the Gold Coast resulted in Paul Dubrovsky, 49, being shot by police six times.

At the time, Mr Dubrovsky’s mother Wendy Watkins told the ABC while she “wanted to punch their lights out” she understood officers did the best they could to communicate with her son before shooting him.

An increased focus on verbal communication was introduced to police training more than a year ago.

“I’ve seen videos from all over Queensland when police had a weapon in their hand and have been able to talk to someone to get them into a hospital instead of potentially getting them to the morgue,” Inspector Allen said.

The experienced officer said after any shooting it was common for police to hear questions from the public like, “Why didn’t they shoot the gun out of the offender’s hand?”

Inspector Allen said it was important people knew using a gun in the field was not like the movies.

“We are trained to shoot at the biggest piece of the target because even an experienced pistol shooter has no guarantee they could hit a small target like a leg,” he said.

“We need to get serious about funding mental health services and tackling the spread of drugs such as ice,” Mr Leavers said.

“With both mental health and drugs, we need the state and federal governments to step up.”

She said further conversation about the effectiveness of police de-escalation techniques on people in crisis was warranted.

“We are in desperate need of more resources for mental health in Queensland,” Dr Fay said.

“This is an area that needs much more funding, resources and social policy that allows those who might benefit from mental health support to come forward to ask and receive help without stigmatisation or being caught up in the criminal justice system.

“Police are often the first responders to people dealing with a mental illness and so their ability to de-escalate [and] manage tense situations is paramount.

“Research of police training recognises that mental health training for officers is increasingly important but also that there needs to be an ongoing approach to training rather than a one-off session on how to manage people in crisis.”

Senior Sergeant Jason Brosnan knows better than most what it is like to use a gun in the field.

Senior Sergeant Brosnan chased Pallas through a Mena Creek property and caught him before realising the thief was armed with a semi-automatic pistol.

“When he told me to get on my knees I thought, ‘here it is — you’re going to get a bullet to the back of the head’,” he said.

“I remembered my training instructor said when someone pulls a firearm on you, you can either do nothing or have a dig, so I spun around, grabbed the gun.”

The gun went off during the struggle and hit Senior Sergeant Brosnan in the leg.

“It was like someone had given me a good thump on the leg. There was very little pain until he ran off and I tried to get up and my leg folded underneath me.”

Pallas was captured by a SERT team shortly afterwards.

Senior Sergeant Brosnan said no officer wanted to be in a position where they needed to shoot a suspect.

“It’s that life-or-death situation, it’s a last resort,” he said.

“No-one has the hope or desire to use their firearm.”