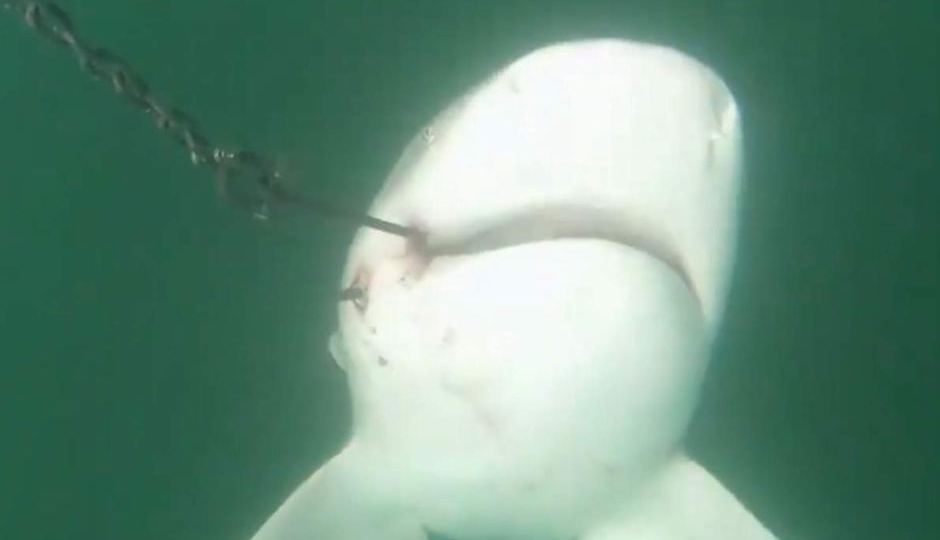 A bull shark near death after being caught on a drum line on the Great Barrier Reef. Photo: Humane Society International

A conservation group has won a legal bid to end the killing of sharks caught on drum lines inside the Great Barrier Reef Marine Park.

The decision has come after Humane Society International (HSI) earlier this year launched a challenge to the shark control program run by the State Department of Agriculture and Fisheries.

On Tuesday, the Administrative Appeals Tribunal ordered the department could no longer shoot dead 19 species in protected areas between central and north Queensland.

The written judgement, by tribunal deputy president Ian Hanger and senior member Adria Poljak, declared that any sharks captured alive must be released, and that killing the animal was only allowed on “welfare grounds”.

This could only occur “when a shark is unlikely to survive release due to its condition or an injury, or which cannot be safely removed alive due to weather conditions or hooking location”.

“It is plain from the evidence given in these proceedings that Queensland’s lethal shark culling program is out of step with national and international developments,” the judgement said.

The tribunal said the evidence that killing sharks did nothing to reduce the risk of unprovoked attacks was “overwhelming”.

It also ruled that the 173 drum lines inside the reef marine park must be checked more frequently and that tiger, bull and white sharks must be tagged and relocated.

The judgement ordered that smart drum lines must also be trialled as soon as possible and further research into tiger shark populations and alternative non-lethal measures must be conducted.

HSI campaigner Lawrence Chlebeck said the ruling was a 60-year win for sharks.

“We always knew it was going to be a tough road from the beginning … we couldn’t be happier with the result,” he said.

Mr Chlebeck described the ruling as a huge step in the right direction.

“The judgement makes it crystal clear that non-lethal technology is the way forward for shark control,” he said.

Both the Department of Agriculture and Fisheries and the Great Barrier Reef Marine Park Authority said in a statement they were reviewing the decision.

“This is a massive win for our Great Barrier Reef and for healthy oceans,” he said.

“This new finding will further assist in breaking down many of the myths that surround sharks and safety, which is an absolutely critical part of getting change.”