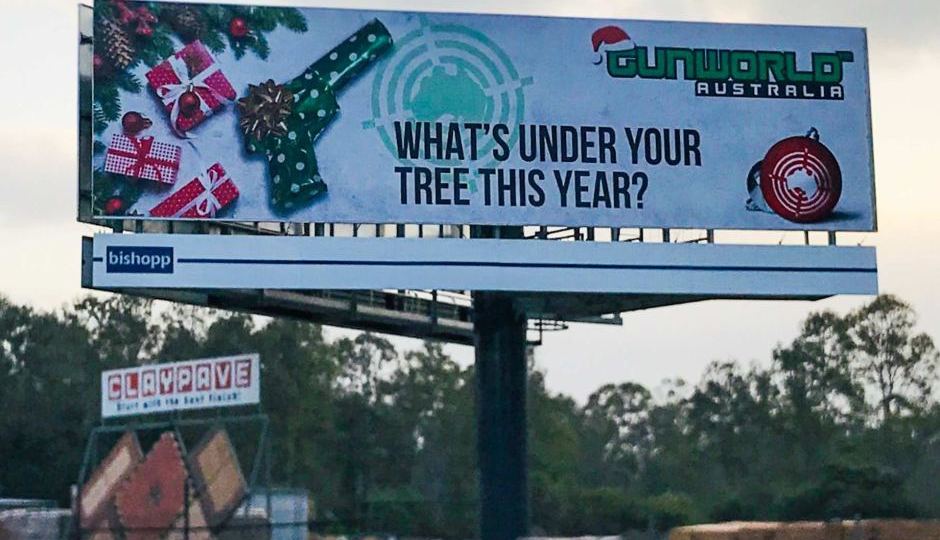 The billboard on Loganlea Road has drawn a mixed reaction.

A handgun for Christmas? That is what one store is promoting along a busy Brisbane road in the lead up to the festive season.

A new billboard on Loganlea Road advertising a local gun store shows a pistol in Christmas wrapping with the heading: “What’s under your tree this year?”

Queensland Police Commissioner Ian Stewart said the ad was sending the wrong message to the community and should be removed.

“I would like to see the billboard taken down,” he told ABC Radio Brisbane’s Craig Zonca and Rebecca Levingston.

“I don’t think it’s necessary. People who use firearms for their sport or work know where to go to purchase guns and I don’t think we need that type of advertising.

“The message that sends to me and to most people in the community would be quite abhorrent and against everything what’s really good about Australia.”

Mr Stewart said it was something that might seem unremarkable in the United States, but not in Australia.

“I know we live in a world of free speech, and I know there is probably nothing illegal with that billboard, but it saddens me that we have businesses that would advertise in that way,” he said.

“I respect those who own guns and use guns for their hobby or sport, I understand that, but there is a balance and I think we have the balance pretty right [here in Australia].”

‘Fairest gun laws in the world’

The commissioner added that the US website Gun Violence Archive reported that on average there had been a mass shooting each day during 2018 in America.

“The definition of a mass shooting is four or more persons shot, not necessarily killed, but at the same time or location – that’s their definition,” Mr Stewart said.

“I don’t know when others are going to wake up, but we have, I think, the fairest gun laws in the world. We are the envy of countries around the world in relation to our gun laws.

“We don’t see mass shootings in Queensland or Australia that other people around the world see. I’m so grateful for that.”

‘Nothing wrong with it’

Reactions were mixed among people who left a comment on the ABC Brisbane Facebook page. Some thought the billboard wasn’t a big deal:

“Nothing wrong with it. They’re a business advertising like all others do. They don’t complain about half-naked women on billboards, so why this?” – Deb Selbie-Cain

“The people offended by this sign should have a good, hard look at themselves. Seriously, grow up.” – Jason Mates

“Ban car ads – cars kill a lot more Australians that guns could ever do.” – Lance Ridley

Others were less impressed:

“Interesting that the ad includes two images of Australia as the target.” – Stephen Peake

“How about a nice advert of ‘accidents happen, but some are more easily fixed than others’. Guns have no place in suburbia.” – Tanya Thirkill

“Yeah not in this country, thanks.” – Leanne Barnes

“I thought it was in America to start with, then I saw ‘Gunworld Australia’ … it’s a terrible ad.” – Sarah Mawer

The same store placed a billboard on the Bruce Highway near the Sunshine Coast earlier this year displaying a row of bullets from biggest to smallest with the words: “Size does matter”.

Ad Standards told the ABC earlier this year that it had received a small number of complaints over the bullet billboard.

“If the complaints raise an issue under the code [of ethics], then a case will be raised,” a spokeswoman said.

According to the Ad Standards website, if the billboard is investigated and a complaint is upheld, the advertiser is requested to remove or amend the offending advertisement as soon as possible after receiving a copy of the draft case report.