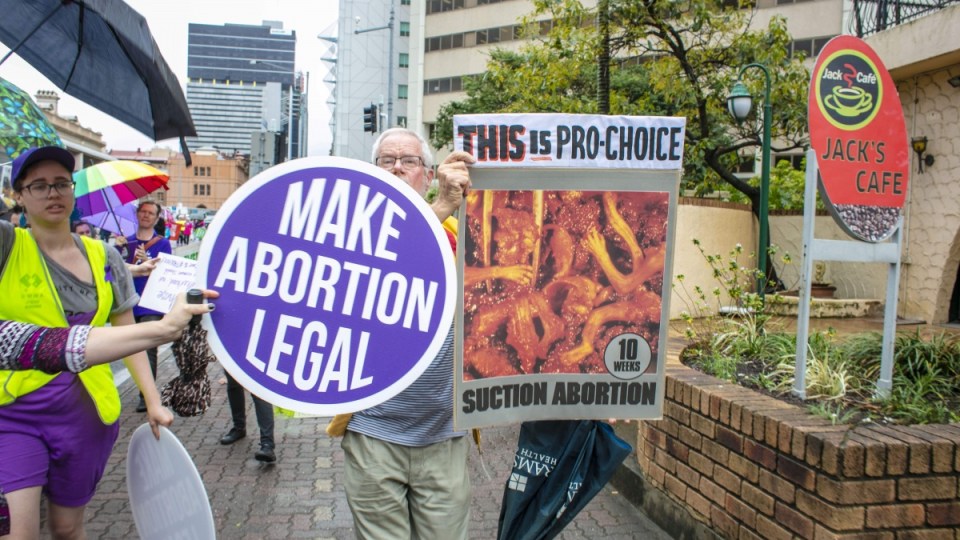 Pro-choice and anti-abortion protesters are pictured in Brisbane on Sunday. Photo: AAP

Those laws have not changed for more than 100 years, but this week MPs will be asked to make abortion legal.

In 1985 police burst through the doors of the Greenslopes Fertility Control Clinic – one of Queensland’s only abortion facilities.

As officers rifled through documents, collecting patient files and interrogating workers, women ran from the clinic, while others arriving for termination appointments looked on in shock.

Judy Petroeschevsky was working at Children by Choice, a counselling service for women, and remembered the moment she learned of the police bust.

“One of the women that we’d referred over to Greenslopes rang us to say ‘There’s police everywhere. What am I going to do?’,” she said.

“She was very distressed and panic-stricken about what was going to happen, if she’d be arrested.”

That day, Sir Joh and his justice minister, Neville Harper, had ordered police to gather evidence wherever they could – including down sewer tunnels.

Two of the facility’s doctors were arrested and charged with conspiracy to procure an illegal abortion and inflicting grievous bodily harm.

It was the first time many in Queensland had witnessed the criminal enforcement of the abortion laws.

“I was expecting we would be raided next and worried what the next moves would be,” Ms Petroeschevsky said.

“We all thought, ‘Would we be arrested? What would happen? Would women be arrested for seeking this service?

“It created a huge amount of fear in the public.”

‘My phone was being tapped’

Terminating a pregnancy was part of the criminal code, meaning women and doctors could be prosecuted for accessing or providing abortion.

“Abortion was a very controversial issue and although it was sought by very many people, it was not talked about,” Ms Petroeschevsky said.

“You didn’t speak out against the Queensland government, and a lot of people left the state because of that.

“I’d been to some demonstrations and someone said, ‘that’s special branch police next to you’.

“I’d hear that echo on my phone, and it was a sign my phone was being tapped.”

Following the raids, the government failed in its attempt to prosecute the doctors.

The judge set a legal precedent, where termination of a pregnancy was deemed to be reasonable where it was necessary to protect a woman from serious threat to her life, or physical or mental health.

But the act of having an abortion remained illegal.

At the time, Sir Joh backed the decision of his justice minister in conducting the raids and pursuing criminal prosecution.

“I support Mr Harper completely and fully and he will not be resigning,” he said.

“And there is no justification for it whatsoever.”

This week, Queensland politicians will be asked to vote on decriminalising abortion, and removing the issue from the criminal code.

Both Labor and the opposition will give its MPs a conscience vote.

If the bill passes, abortion in Queensland would become strictly a health issue, with abortions available on request up to 22 weeks.

The legislation would also establish a “safe access zone” of 150 metres around clinics to prevent protesters approaching.

Pro-life advocates have claimed the majority of Queenslanders do not agree with the legislation, and it could lead to an increase in the abortion rate.

“It is a very anti-women bill. We will fight any way we can to soften the brutality of this bill if it does go through, but this is a very serious thing,” she said.

“This would be very bad for Queensland, and it’s actually unnecessary in terms of accessibility.

“We will fight for protections for women.”

Australian Christian Lobby Queensland director Wendy Francis has said other alternatives should be encouraged, such as adoption.

But Ms Petroeschevsky said she believed abortion shouldn’t be classed as a crime.

“It’s a medical procedure. It needs to be out of the criminal code so women and doctors and nurses can be free to undertake this procedure without that fear of being arrested,” she said.