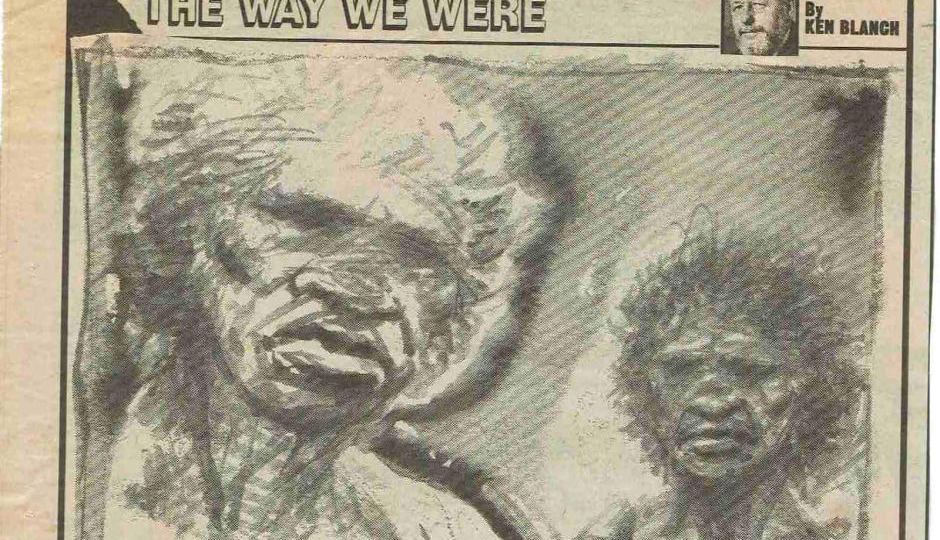 It’s the real-life crime drama that struck terror into the hearts of a pioneering community — a white woman raped on the banks of the Brisbane River, near Ipswich, and the subsequent trial, conviction and death of an innocent man.

But more than 150 years on, partial justice may have finally have been served, thanks to the tenacity of former journalist and crime writer Ken Blanch.

The 90-year-old said he can now die happy believing he had set an innocent man’s soul free, after winning an extraordinarily rare posthumous pardon.

Aboriginal man Kipper Billy was wrongly convicted of rape in 1861.

This morning, his Royal Pardon was handed over to Indigenous representatives at a special ceremony at Government House in Brisbane.

The injustice to Kipper Billy haunted Blanch for nearly 30 years.

‘Unluckiest Aboriginal ever sentenced to death’

In a 1990 Sunday Mail magazine column Blanch wrote: “Kipper Billy must have been the unluckiest Aboriginal ever sentenced to death”.

Depending on what you believe, he was either shot or bludgeoned to death while trying to escape the hangman’s noose at the old Petrie Terrace jail.

What Kipper Billy could not have known was the information that would have set him free was already in the possession of authorities.

Less than a month later, his alleged accomplice in the rape of Jane Rae, Billy Horton, would be pardoned.

Blanch’s research found Mr Horton’s pardon came through “just minutes after witnessing the appalling execution of a fellow prisoner, which he believed to be a macabre rehearsal of the fate that awaited him”.

He was exonerated after a mailman came forward with an unassailable alibi for the time of the rape.

Judge Alfred Lutwyche later ruled Billy Horton was never there, nor was Kipper Billy, who was seen 8 kilometres away not long after the rape.

But the case of “mistaken identity” was too late for innocent Kipper Billy.

Records at the Queensland State Archives show Kipper Billy feigned illness when a prison guard came in to check on him and made his bid for freedom.

But Blanch said he believed the “mental terror” Kipper Billy endured believing he was about to be hanged for a crime he did not commit, drove his desperation to scale the jail fence.

The case had already aroused public interest before the revelation that his body had been dug up and his head removed by grave robbers.

Blanch said it is believed the grave robbers were allegedly acting for local chemist, TS Warry, who was also a member of parliament and justice of the peace.

He wrote that Mr Warry had “claimed to have retrieved the skull for scientific purposes” and it “was exhibited to many people in the ensuing years”.

A journalist well known for trying to right wrongs during his 50-odd year career, Blanch submitted a petition for a pardon to Queensland Governor Paul De Jersey just over a year ago.

It ended with a plea: “I sincerely hope this sad injustice can be rectified even now and history rewritten”.

The request ended up on the desk of Queensland Attorney-General Yvette D’Ath, who gave Blanch and his family a sympathetic hearing just three weeks ago.

He told Ms D’Ath “poor old Kipper Billy is still listed in official documents as a trouble maker and a bad fellow”.

“An Aboriginal criminal — a rapist in fact, but as far as I am concerned that appears to be incorrect and it should be corrected in the records,” he said.

“I want to say it is people like you, citizens like you, who have chosen to become a champion of somebody you never knew but you are making a difference for this person,” she said.

Fifteen days later, the state’s most senior law authority came good with a pardon for Kipper Billy from the Queen.

Blanch was emotional at the ceremony today, holding back tears as he accepted the pardon.

“He was not a stranger — he was a fellow Australian. I feel proud justice has been done,” Blanch said.

Governor Paul de Jersey said he hoped Kipper Billy “was in that room with us today”.

“The gesture symbolically — it is outstandingly important as a judge … to deliver justice according to law, which sometimes can be thought of as a sterile exercise, but today we have delivered justice,” he said.

Ms D’Ath said it was an “historic day to have a pardon for an Aboriginal man who lost his life in 1862”.

“Not knowing at the time Justice Lutwyche had already written to the Executive Council suggesting this man be pardoned,” Ms D’Ath said.

“A life taken, a life that you are in prison for, something you know in your own heart you did not do it, but in those days for whatever the reasons they thought he did it,” she said.

“At least they are acknowledging this man — and so they should — he was innocent. ”

Aunty Johnson is angered over the fact this was a case of mistaken identity.

“It must have been them — I don’t think in those days they saw our people as human beings because they lived differently in their culture — they were treated very badly,” she said.

But she said the community was relieved justice has finally come.

Even today there is little known about Kipper Billy.

It is not known what family group he came from or if he has any living relatives.

His final resting place is also a mystery.

He was buried in unhallowed bushland near what is now Lang Park Stadium at Milton in inner-city Brisbane.

The spot would eventually become the graveyard for St John’s, with bodies being exhumed for parkland in 1913.

Blanch could not find any record of Kipper Billy’s body being exhumed or the eventual resting place of his head.

“Perhaps in the dead of night when the last hurrahs of some epic sporting event have subsided, Kipper Billy’s restless presence haunts the green playing field,” Blanch said.

He is hoping now at last Kipper Billy’s soul can rest in peace.