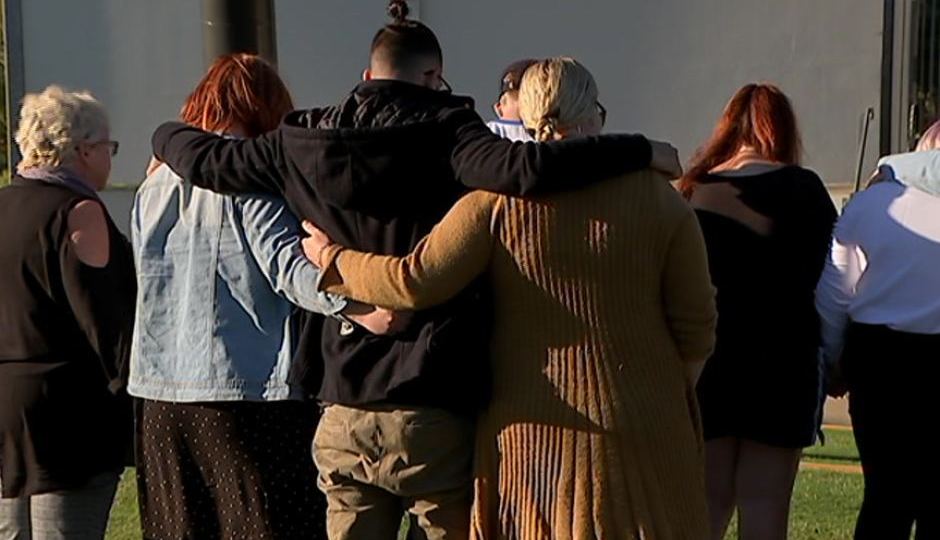 Mourners comfort one another at a public memorial for Larissa Beilby. Photo: ABC

Sixteen white doves, one for every year of Larissa Beilby’s life, were released in her honour during an emotional public memorial service north of Brisbane on Sunday afternoon.

More than 100 mourners gathered at a Pine Rivers park to pay their respects and support her grieving family.

The public outpouring of grief was punctuated with music, prayers, hymns and tears.

Many mourners brought flowers and written tributes to remember a “fun loving soul”.

One note read: “Those special memories of you will always bring a smile”.

Another simply said, “To dear Larissa, you will always be remembered”.

The 16-year-old’s body was found in a barrel in the back of a ute south of Brisbane last month.

Zlatko Sikorsky, 34, was charged with murdering and torturing Larissa following a 27-hour standoff with police on the Sunshine Coast last week.

Larissa’s father Peter Beilby comforted his oldest daughter Deanna as she spoke on behalf of the family.

“As a nation we have been brought together under the most horrific circumstances and we stand together until justice is served to our 16-year-old daughter, sister and friend,” she said.

She went on to honour the “funny, gorgeous, smart, cheeky girl” she knew.

“I’ll miss her FaceTime calls when she’d trick me into pulling silly faces and she’d screenshot them and tell me she’d put them on Facebook for my next birthday.

“I’ll miss her coming into my room to wake me up to make cookies at 6.30 in the morning.

“I will miss everything about you, Riss. My heart is broken. Fly high angel.”

“No words I can say to anyone or about anything will give me the closure I need, so all I can really say is I love you Larissa and so does everyone here,” he said.

The family asked each member of the crowd to ensure they show a random act of kindness to a stranger during the next week.